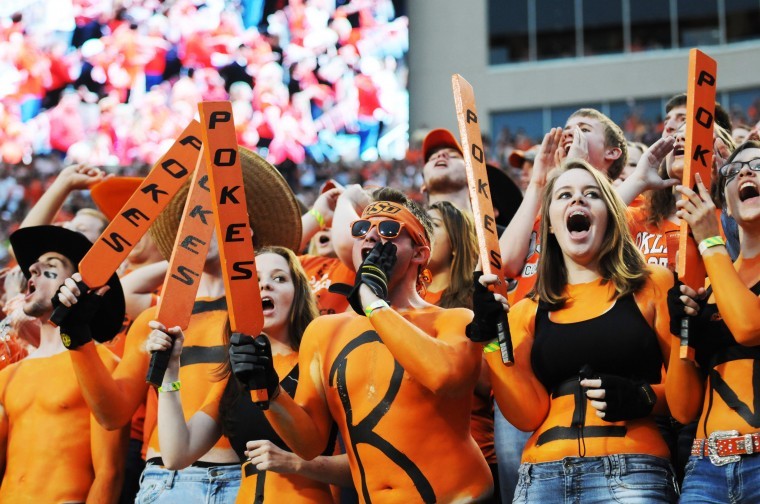 Inside Boone Pickens Stadium, there is an added dimension of noise that goes along with the clapping and screaming of the game: The Oklahoma State Paddle People. It was formed in the early 1990’s by a few students who snuck a few wooden paddles into the stadium and began slapping them on the padded wall below them. What those students created on that day is something that has turned into an opposing teams’ worst nightmare.

The paddle slapping has grown from a select few members in the 90’s to nearly 200 students today. The paddle people will camp out days in advance of football games in order to get in the stadium before the other students on game day. This has become an important part for the organization, because if they are unable to arrive early, they will not be on the front row.

Becoming a “Paddle Person” isn’t as easy as it may sound. Each paddle person must make their own paddle; and you might want to make more than one because they have been known to break during games. Each member must also pay dues. Because these paddles are considered “weapons” the athletic department doesn’t let the students bring the paddles in with them. Once they get inside the stadium, they must go retrieve their beloved paddles from stadium security.

Due to a rule change put in place by Big 12 Athletic Directors in the middle of the 2012 football season, the Paddle People are unable to use their paddles when the opposing team’s offense is on the field and when the ball is in play. If they do this, a 15-yard penalty could result.

People can argue whether or not the Paddle People have any affect on the team’s performance. But, when Iowa State Coach Paul Rhoades was asked about the difficulty of the atmosphere in Stillwater, he acknowledged you must face the Paddle People, along with the football team.

Many coaches have faced the Paddle People and many more will continue to face them. With their growing popularity across campus, the club continues to expand and become louder, game by game; definitely good news for Mike Gundy and his players.