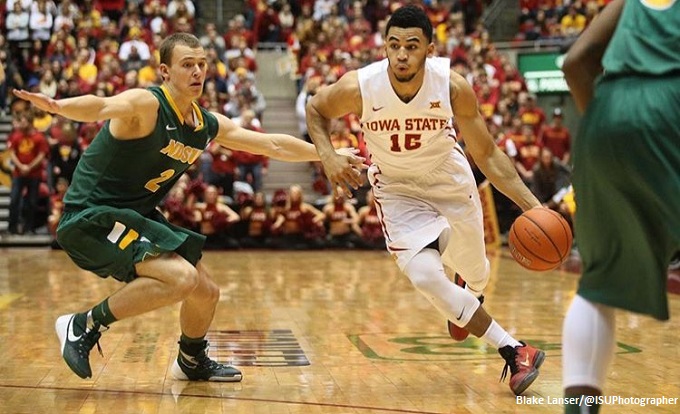 Upon finding out that Naz Mitrou-Long would miss the rest of the season, I could feel an imaginary tear run down the side of my cheek. The loss of Mitrou-Long for the remainder of the season is a gigantic blow for the Cyclones and their Final Four hopes.

On Tuesday, Iowa State announced that Mitrou-Long would miss the rest of the season as he continues to recover from arthroscopic hip surgery, which was done this past offseason.

To say this loss is a big one is a total understatement and an injustice to the ability of Mitrou-Long. He played in the first eight games of the season and averaged 12.0 points in 31.6 minutes per game, and although he wasn’t shooting that great from beyond the arc, 29 percent, he is still considered one of the team’s top three point shooters, if not the best. Another factor that will be lost in him missing the remainder of the season is the leadership and experience he brings to this team as a senior.

The major problem with Mitrou-Long now out for the season is the depth of the fifth-ranked Cyclones. In general, the Cyclones do not have much depth, as only seven players were seeing meaningful minutes and now that Naz is gone, that depth will be even thinner.

The saving grace for the Cyclones is going to have to come in the form of Deonte Burton. Coming into this season, Burton was a nice addition, but he was primarily just going to be an energy and hustle player. However, now that Mitrou-Long is done for the season, Burton will have to embrace a much larger role in the Cyclone’s offense, whether is ready or not. It is going to take some time for Burton to get adjusted with everything and I’m not sure the Cyclones have time for that, especially with the tough part of the schedule still looming.

Two other players that are going to HAVE to step up are Matt Thomas and Hallice Cooke. Between those two though, Matt Thomas will likely slide into the starting role and will have to continue to produce like he has these past two games if the Cyclones want to stay as one of the best teams in the nation.

Thomas has given me more headaches than I’d like to remember because he is supposed to be this terrific shooter with “in the gym” range and I have yet to see that, out of the last couple of games. Now if he can continue playing like this for the remainder of the season, (crossing my fingers) the Cyclones will be just fine because they still have two All-American caliber players in Monte Morris and Georges Niang who will carry the team.

The Big 12 is one of the best basketball conferences in the country and losing one of your best players is never a recipe for success, especially with a first year coach at the helm. There’s no doubt that coach Prohm is going to have to get creative with the lineups he puts out. Frankly, I’m excited to see what he does.

With all that being said, I still have all the faith in the world that the Cyclones will be fine and continue to play well, and the reason for that: HILTON MAGIC.