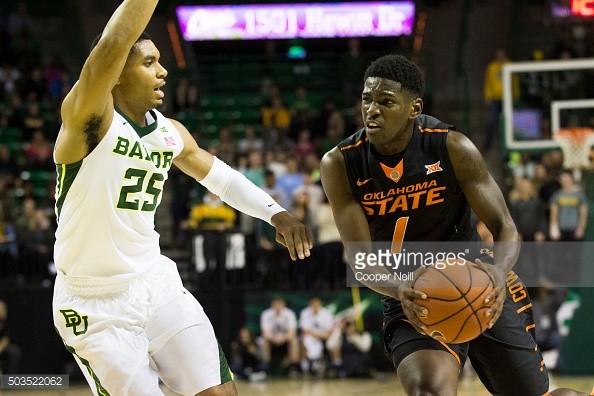 Oklahoma State has battled some offensive woes early this season that have triggered the team’s slow start. Injuries and a lot of new pieces are to blame for the offensive struggles so far this season.
Also, since Senior Phil Forte went down in the third game of the season with an elbow injury, the team has struggled offensively. Not only are the Cowboys missing their best offensive player, but they are missing their leader. Forte has proven to be the heart and soul of this Cowboys squad in recent seasons. It is unlikely that he will return this season, and he plans to file for a medical redshirt.
In the meantime that leaves this team and Coach Travis Ford trying to figure things out. The Cowboys have struggled in a few areas early on this season.
On offense over the last eight games the Cowboys have averaged just 64.5 points per game. For comparison sake, Oklahoma has averaged 88.6 over their last eight games. The problem for Oklahoma State is that without Ford they lack a go to scorer.
Jeff Newberry has shown flashes, he led the Pokes in scoring in the conference opener against TCU with 23 points, but hasn’t been consistent, averaging 11.9 points per game. A case can be made that the Cowboys do a good job of playing as a team, five players average at least nine points per game, but again the problem is lack of go to scorer. The best teams often have a ‘go to guy’ that they can rely on in big moments late in games. Oklahoma State does not currently have someone to take over that role. The rest of this month will serve as an audition for who will become the leader of the team over the final several weeks of the season.
So, who are some potential options? Well, freshman Jawun Evans has played pretty well so far averaging over 10 points per game and just under five assists per game, but isn’t very aggressive in looking for his own shot despite shooting 43 percent from the field and 42 percent from three so far this season. Plus, he’s a freshman.
Oklahoma State didn’t bring Evans in with the thoughts that he would be a big time scorer. Also, I’m not sure it’s in him to shoot the ball that much, he’s just more of a distributor. However, if Oklahoma State wants to be competitive in a really good Big 12 conference, Evans and the rest of the Cowboys supporting cast (Hammonds, Olivier and Carroll) will have to be more aggressive on offense.
Some good can be said about the Cowboys defense so far this season, holding opponents to 63.5 points per game and 38 percent shooting so far this season. You could say the Pokes have relied on their defense so far this season, but in this year’s Big 12 conference, teams will have to score to be competitive. For example Oklahoma, Kansas, Iowa State and West Virginia are all averaging over 85 points per game. If Oklahoma State can hold these teams to under 75 points, that would be an enormous success. It’s just a matter of finding the offensive output to compete.
It’s still early in conference play and there’s still time to turn things around. If Oklahoma State can develop a go-to scorer and a more effective offense they might be able to avoid finishing at the bottom of the conference, but it won’t be easy in a league that’s as deep as the Big 12.
**If you want a chance to win FREE Big 12 gear from your favorite team, be sure to sign up for our weekly newsletter! **