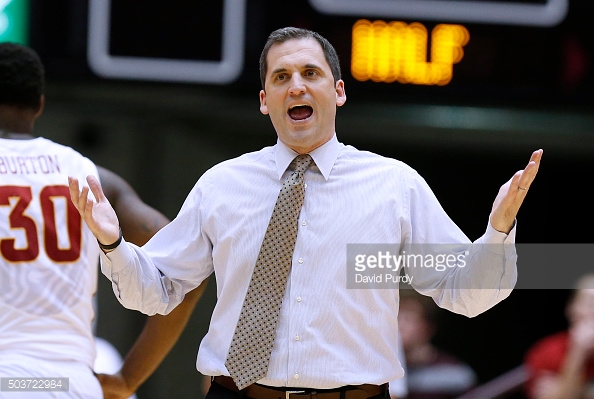 Iowa State started the college basketball season ranked in the top ten with the mission of challenging Kansas’ amazing 11-year regular season title run. Just two games into the Big 12 Conference schedule and No. 13 Iowa State (12-2, 1-1) finds itself already playing catch up. A tough loss to a pesky Northern Iowa squad at Wells Fargo Arena in Des Moines dropped ISU out of the top 10 and another nail biter in the conference opener against Oklahoma was also tough to swallow (ISU had a double digit lead in the first half).

Now, a loss to Oklahoma (in Norman nonetheless) certainly does not kill ISU in the race for the Big 12 championship, however, if Iowa State wants to dethrone Kansas from the atop the Big 12, the Cyclones can’t afford to slip up—specifically on the road as they have in the past. Traditionally, going on the road has been a thorn in the Cyclones’ side. In 2014-2015, the Cyclones dropped a head scratcher to a bad Texas Tech team in Lubbock. Two years ago the Cyclones went to Morgantown, and got stomped by a mediocre West Virginia squad, 102-77.

Winning at home is a completely different story. ISU is 70-5 in the past five years and already own a miraculous 20-point comeback over rival Iowa in December. Hilton Magic gonna Hilton Magic.

While the 70-5 record at Hilton Coliseum is extremely impressive, some of the games for the 2015-2016 squad have left you wondering if this team can achieve what the ’13-’14 and ’14-’15 teams could not. Recent games against Arkansas-Pine Bluff, Buffalo, and most recently Texas Tech, were situations where the Cyclones won by a respectable amount, but looked as if they were going through the motions.

These “pesky” teams keep hanging around and the Cyclones appear to be struggling– it’s not until looking at the box score until you realize the Cyclones won by double digits … and you’re left baffled.  The average margin of victory for ISU this season is 15.5 points (while averaging 85.1 ppg). When the Cyclones do struggle offensively (typically in the half court set), their play becomes very predictable—as the Cyclones resort to senior First Team All-Big 12 Forward Georges Niang. Thus far this season, Niang has been fantastic, averaging 19.2 points per game and shooting 54.5% from the field.

However, what Cyclone fans caught a glimpse of against Texas Tech were the consequences of when Niang gets into foul trouble. Can the Cyclones rely on someone else to pickup the scoring slack consistently? Losing Niang in the lineup at any given time is arguably one of the biggest blows to any basketball team in the country. Iowa State was counting on senior guard Naz Mitrou-Long to be the complementary scorer to Niang, but Mitrou-Long has been ruled out for the rest of the year due to an ongoing hip injury; although there have been rumors that he may try to return by season’s end.

This is one of the most glaring concerns for this team that already has depth issues. Monte Morris is one of the best point guards in the nation, no one would disagree there, but he has never really been a huge scorer. Matt Thomas (career-high 22 points vs Texas Tech), Deonte Burton (19 points vs OU), and Abdel Nader (21 vs NDSU) have all had great scoring games, as has Jameel McKay, but consistency remains to be seen. The race for the 2015-2016 Big 12 regular season title has begun. With so many excellent teams in the Big 12, the question is simple in Ames: can Iowa State keep up?