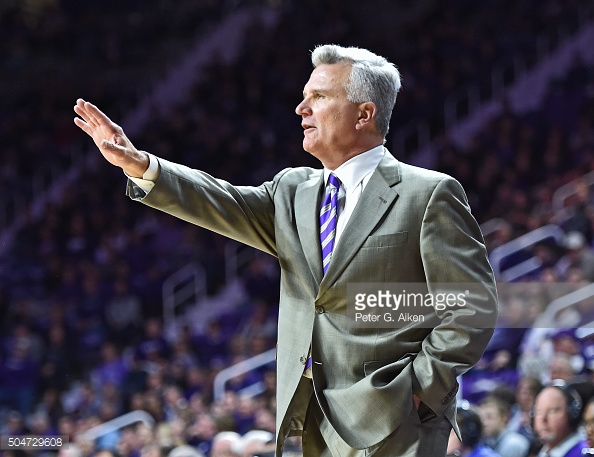 So, there I sat December 4th as I watched the Wildcats pull off a road victory over Georgia in Athens. This was no small feat for the very young Wildcat squad. Remember, they only won one true road game last year and only three the year before that. I was very happy for the team, I thought this could really be the season the ‘Cats would excel in Big 12 play and all the Bruce Weber haters would have to eat their words. So, imagine my surprise as the proverbial bandwagon was filling up faster than you could say ‘Sweet Sixteen’.

And now, here we sit just a little over a month later, about 2 weeks into Big 12 play, and I’m watching people jump ship and starting the ‘Bruce Weber this…’ and ‘Bruce Weber that…’ crap all over again.

So let’s talk about the losses the squad has had this year. Fifth ranked North Carolina, a game that they were leading with just a few minutes to go. Let’s be honest, they lost that game because they were (still are) a young team that had not learned how to win those games yet, the key word there being ‘yet’. Fifteenth ranked Texas A&M, eleventh ranked West Virginia, second ranked Oklahoma, and what seems to be a baffling loss to Texas when the Wildcats had their worst shooting night of the season, 19-of-51.

Now don’t get me wrong, losing ALL of those games is not the sign of a good team. However, if you’re looking for a silver lining, none of the losses were by more than ten points. So again, that points to a young team that has the potential to become really good. But, with the Big 12 schedule underway, if they indeed can take that next step, this team must be led by the veterans on the team that have been here long enough to know how to win the winnable games.

Bruce Weber’s squad took that first step last night towards becoming the team that all Wildcat fans want them to be, and that some know they can be, by beating Texas Tech. They must win the games that they are expected to win, while also growing up quickly and starting to steal some of those games that they shouldn’t. Granted, the Big 12 is so deep, those guaranteed wins are few and far between. So while a victory over Texas Tech is nothing to celebrate, the fans of the name on the front of the jersey need to show some patience for the names on the back.

This year’s squad has had five different players lead them in scoring, three of which have been the freshman trio of Dean Wade, Barry Brown and Kamau Stokes. Senior Justin Edwards seems to be settling into the role of being a team leader along with big man Stephen Hurt and junior Wesley Iwundu.

Having watched every non-conference and Big 12 game over the last ten years, including almost every home game from my seat, I can honestly say I am more excited about what this team can accomplish than any team since the departure of Jacob Pullen. So, as we enter the teeth of the Big 12 schedule, if you want to get on board with this team … do so. If not, then don’t expect a seat on the train later when this team becomes what I know it will.