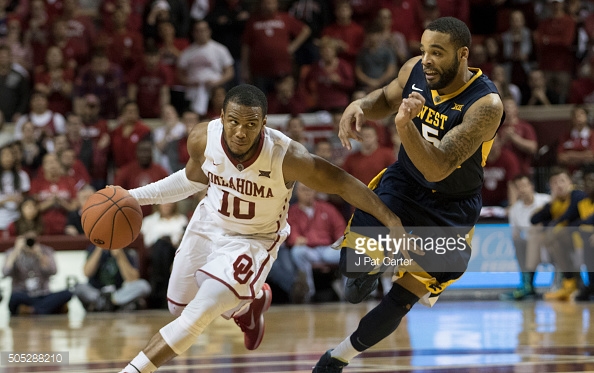 Four teams in the Big 12 are ranked in the top 10 in scoring.  Oklahoma ranks third, Kansas is fourth, Iowa State is seventh and West Virginia ranks 10th.  All are scoring over 85 points per game and each team possesses dynamic individual scorers that can take over a game at any time.

Name a better conference in the country that can match up with Big 12 teams? You can’t.  Top to bottom the Big 12 boast teams that can beat anybody on any given day. They have the nation’s best winning percentage against non-conference opponents (83%).

Texas Tech can be a dangerous team under Tubby Smith.  If they can find consistent scoring and steal a few games on the road while protecting Lubbock, then they have a chance to grab an 8 or 9 seed.

Oh yeah, we cannot forget about the Baylor Bears.  The Bears can defend and rebound as they are second in the Big 12 in steals and rebounds.  Plus, they can score scoring nearly 82 points per game led by Taurean Prince and Rico Gathers.

The Texas Longhorns led by Shaka Smart are no stranger to the Big Dance.  We all know what he did at VCU, but I don’t think this is Texas’ year to make any noise.  However, a Texas team as a 12 or 13 seed is a team you don’t want to face in the opening round.

The Big 12 features some of the nation best players and scorers.  The number two scorer in the country is Oklahoma’s Buddy Hield, who should run away with Player of the Year honors.  Hield alone can lead the Sooners to the Final Four.  It has happened before.

Kansas, well it’s just Kansas.  Bill Self is arguably the best coach in the Big 12 and he has a veteran team that is primed for a deep run in March and could cut down the nets.  Is it me, or has Iowa State’s Georges Niang been in Ames for like 20 years?  Either way, he is 20 points per game scorer and will hurt you inside and out.  Throw in my favorite player for the Cyclones, Jameel McKay, or as I call him the “Junkyard Dog,” and you have a double-double machine every game.

However, the team that I think will make the deepest run and win the National Championship will be the West Virginia Mountaineers.  They say offense sells tickets, but defense wins championships and that is what Bob Huggins bunch does and does well.  The Mountaineers force a nation-best 21 turnovers per game with their relentless full court pressure.  Now I may be dating myself here, but this reminds me of the Huggins Cincinnati teams in the 90s that featured players like Nick Van Exel, Corey Blount, Danny Fortson and Kenyon Martin.  Gritty and grimy players that love to get in your face, smell your breath, and get under your skin.  In the NCAA tournament, the games tend to slow down and each possession is critical. WVU should be the Big 12 favorite to win the National Championship.

Because they can make stops and frustrate you.

One would assume a Buddy Hield led squad can win it all and sure, it is very possible.  My concern is that if Hield has one off night and the Sooners can’t shoot the three consistently, they will be finished.  Yes, the Sooners can rebound, they are first in the Big 12 in that category, so they will always get second chance points. But again, their flaw is that they rely too much on the three; and we all know the age old adage, ‘you live by the three and you die by the three.’

As much as I like Bill Self and Kansas, it seems like the Jayhawks are always the team that gets knock out early and messes up everybody’s brackets.  Iowa State is a fun bunch to watch, but they don’t defend well enough to win six straight games.

If I had to go out on a limb, I would have two Big 12 teams, West Virginia and Oklahoma, in the Final Four with the Mountaineers winning it all.  This is Bob Huggins year and he has the formula to win it all in March.