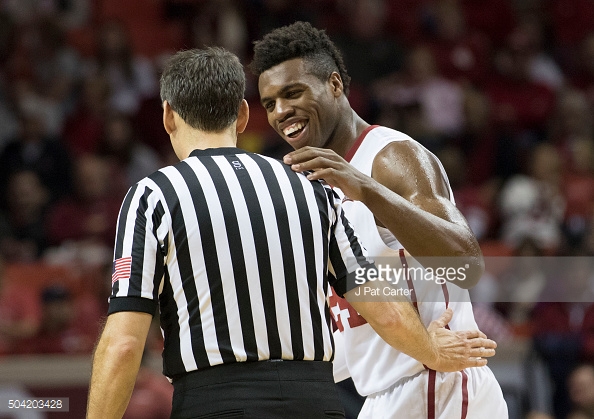 In what was a heavyweight Big 12 showdown on Saturday, the Oklahoma Sooners got a huge tip-in from Khadeem Lattin with 2.8 seconds remaining to get a big win over No. 11 West Virginia on Saturday 70-68.
The win improves the Sooners to 15-1 overall and 4-1 in Big 12 play, currently putting them at the top of the league with three other teams that are 4-1(Kansas, West Virginia, Baylor). The Sooners are mostly regarded as a jump shooting team, so the age-old question with a jump shooting team is always, “what happens when they don’t hit shots?” We got an answer yesterday for Oklahoma.
The Sooners shot just 33 percent from the field yesterday, but compensated by attacking the basket and getting to the line often. The Sooners shot 27 of 32 from the free-throw line to overcome their poor shooting from the field.
The big question for much of this early part of conference play has been, “who is the best team in the Big 12?” The Sooners will likely be the number one ranked team in the country when the new poll comes out on Monday, but are they the best in the league?
I think the easy answer is we don’t know who the best team in the Big 12 is yet. The Sooners were the best this week, but even so, struggled to beat an Oklahoma State team that has been anemic on offense this season.
That being said, we can only go based on the game that have been played to this point, so  Oklahoma is the best team in the Big 12. When combining a triple overtime loss to Kansas, along with a really quality win on Saturday against West Virginia (a game that was largely played at the Mountaineers tempo), the Sooners have proven more than any of the other Big 12 teams to date. But, as we’ve seen far too many times in college basketball, being the best team in January doesn’t count for much, it’s about being the best in March.
We’re a long way from knowing whether this Oklahoma team has already peaked or if they will continue to get better. The Sooners starters are great and truly carry this team, but Oklahoma needs more bench production to help this team make a deep run. The Sooners’ bench has scored just 40 points in five Big 12 games.
Walker and Buford have shown potential, but they haven’t been consistent. The fact is that most teams that make a deep run in March typically have seven or eight players that contribute and the Sooners just aren’t getting that yet.
Another factor at play in the Big 12 is whether the two freshmen post players at Kansas (Diallo and Bragg) continue to get better. If they do get better it would make and already deep Kansas team deeper and better.
Baylor got thumped by Kansas in their Big 12 opener, but since then hasn’t lost a game, including impressive road wins at Iowa State and Texas Tech. Baylor and West Virginia are both deep teams as well, but aren’t necessarily as talented as Oklahoma or Kansas.
Right now I do think Oklahoma is the best team in the league. Yes, they lost at Kansas, if you can call that classic game a loss, but if that game is played in Norman instead of Lawrence maybe it goes the other way. There is still a lot of basketball to be played and it will be a lot of fun to watch this year’s Big 12 play out.
**If you want a chance to win FREE Big 12 gear from your favorite team, be sure to sign up for our weekly newsletter! **