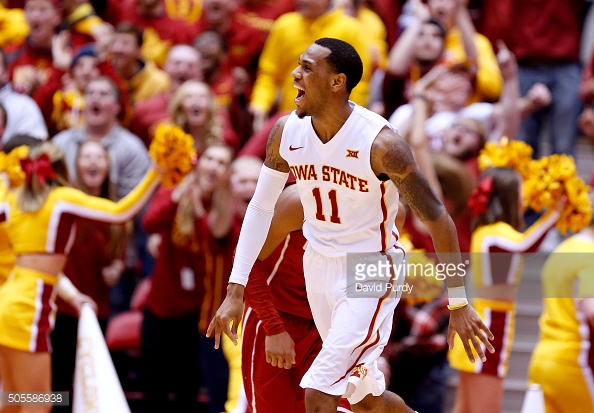 And just like that, down goes another highly ranked team in the state of Iowa.

Just hours after becoming the No. 1 seed in the Associated Press Top 25 poll for the first time since 1990, the Sooners lost to the No. 19 Cyclones inside a sold out Hilton Coliseum.

To say the win against the Sooners Monday night was big for the Cyclones is a complete understatement. Just a week ago, first year head coach Steve Prohm and the Cyclones were 1-3 in the Big 12 and looked like they didn’t even belong in the top-25. Now, the Cyclones sit at 3-3 and although they are far from where they need to be, a win against the top team in the nation is exactly what the doctor ordered.

Coming into the game, I knew Buddy Hield was going to be a problem for the Cyclones because for one, he isn’t just the best scorer in the Big 12, he might be the best scorer in all of college basketball, and two, the Cyclones defense is not very good at the moment. As I figured, Hield went off for 27, which included seven three pointers and almost single handedly won this game for the Sooners.

With that being said, I do think Matt Thomas played great defense on Hield throughout the night. Yes, Hield scored 27 and yes he hit seven three’s, but Thomas was chasing him the entire night and forced Hield to take some really tough shots. And even though Hield ended up making a lot of those shots, as a fan, I can live with a great player making great shots.

What I can’t live for, the Cyclones three-point defense. Although they won, the Cyclones three-point defense was absolutely brutal; and that might be putting it lightly. The Sooners made 17 three’s in the game and wound up shooting a whopping 53.1% from beyond the arc. Now, if I would have told you before the game started that the Sooners would make 17 three’s and shoot 53% from the three-point line, your response would probably be: Sooners win.

I don’t know how the Cyclones need to change their three-point defense, but something needs to change in a hurry if they want to stay competitive in the Big 12. While some of the Sooner’s three point attempts were contested, a majority were wide open and that just simply can’t happen against a team like Oklahoma.

A huge bright spot for the Cyclones was yet again the play of Georges Niang. He finished the game with 22 points and continues to be the Cyclones go to guy in clutch situations. Even though people say he might not make the NBA because he’s too small or too slow, I want to get one thing straight, the dude can play. He is easily one of the most versatile scorers in the NCAA and is a catalyst for the Iowa State Cyclones. He constantly makes big shot after big shot and personally, I don’t think he gets enough credit for just how good he is.

Even though I almost had a heart attack about five different times, lost my voice from screaming at the TV and just about passed out in the final minute, I wouldn’t have wanted this game to play out any other way. And if I’m really being honest with myself, this game came down to one simple thing: Hilton Magic. The rest of the Big 12 should take note.