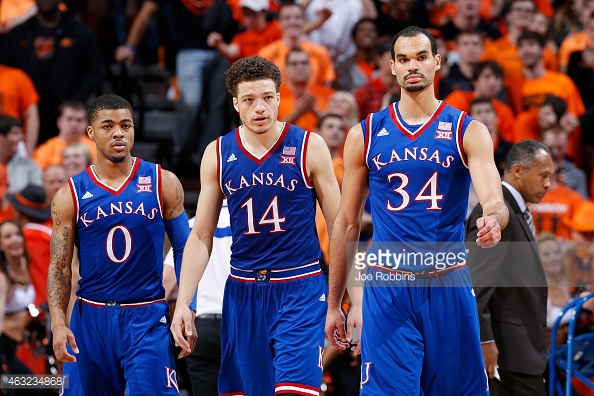 In any given year there are generally around eight to ten college basketball teams that seem to have a realistic shot at winning an NCAA title heading into March Madness. Although every year there are a great deal of upsets throughout the tournament (KU fans understand this better than most in the country), generally at least a few of the top ranked teams advance to the Final Four. Even though the season is still somewhat young, the Jayhawks have already started to distance themselves from the rest of the nation once again as one of its’ top teams.

There are a number of factors leading to this, starting back in October at the Big 12 Media Days when coach Bill Self announced that he would be opting to use a smaller lineup, starting sophomore point guard Devonte’ Graham in addition to fellow junior guard Frank Mason. The move worked immediately, as it gave KU a much quicker and better ball handling team than in years past when using a bigger lineup. Also, it has lead to what Bill Self has recently called his greatest three point shooting team ever while at KU (currently second in the nation shooting .449% from three as a team).

Graham and Mason have each hit shots consistently (both shooting above 40% from three) and have done a great job of handling the ball and distributing all season long, including Big 12 play. The move also has allowed for junior Wayne Selden Jr. to move to the wing position, which has been incredibly beneficial. Before this year, the Jayhawks had supremely talented one-and-done players Andrew Wiggins and Kelly Oubre commanding the wing position in Bill Self’s lineup, leading to Selden Jr. being moved to a less comfortable 2-guard position. His struggles were hard to miss, as ball handling and decision-making often gave him trouble. Now that Selden Jr. has been able to move back to his more natural spot on the wing, he has completely taken off, averaging 14.9 points a game (up from 9.4 last year) and shooting an incredibly hot 49% from three point range (up from 36.5% last year) all while driving the ball to the basket efficiently and making less turnovers and bad decisions.

Another big reason for why KU is looking like an improved team this year (and for why this 2015-16 team has a better chance of winning a championship than any of Self’s teams since 2008) is the depth at every position. KU is in a rare position this year in the fact that it is a blue blood program that has some major experience. In this era of college basketball it is incredibly common for the bigger and more prestigious programs in the nation to win by getting and continually replenishing better talent than smaller programs can attain, often times trading out young talent to the draft for the newest wave of top highschool talent coming in. Even though KU still got commitments from a few top recruits last year (five star big men Cheick Diallo and Carlton Bragg, also four star combo guard LaGerald Vick), they also have a very solid and experienced core already in place to add them to.

Although Graham is more ideal, both he and Mason are very capable of playing the point guard position. For the 2-guard and wing position, the Jayhawks have a number of talented players that can back up Selden and Mason if needed. Of the players that provide depth at 2-guard and wing positions, Junior sharpshooter Brannen Greene often is given minutes off the bench, hitting a ridiculous 58% from three and also starting to slowly improve his glaring weaknesses at the defensive end. Another important piece that provides depth for Kansas is Sviatoslav Mykhailiuk. “Svi” as everyone calls him, is still only 18 years old as a sophomore, and has a ton of potential. Although he hasn’t connected on as many shots as he’d like to at this point in the season, (shooting 34% from three) continued minutes and game experience will help Svi to improve throughout the year off of the bench.

As far as the big men go, the Jayhawks don’t really have a typical trademark Bill Self center like in many past years (Cole Aldrich, Thomas Robinson, Joel Embiid, and Jeff Withy, for example). This has not proven to be a problem though, as senior power forward Perry Ellis has proven to be one of the nations best offensive players, averaging 15.9 points and 7 rebounds a game. The fifth spot of the lineup has been filled with a combination of either Hunter Mickelson, Jamari Traylor, or Landon Lucas so far. All three are solid upperclassman players who can be counted on to provide productive minutes throughout the season, but none of them are strong offensive players. That’s where Carlton Bragg and Cheick Diallo come in.

Even though Diallo is still a raw offensive player, he has an incredible motor and a wingspan that will make Jay Bilas downright giddy whenever draft night comes around. Just a side note: as all KU fans should be, I’m really hoping that Diallo decides that another year under Bill Self will be beneficial to both his development and his draft stock. His recent play has been good enough to start earning some increased minutes, which will hopefully loosen up the freshman who has been noticeably anxious for more playing time. As the season progresses, watch for Diallo to start gaining an increase in both minutes and confidence as he becomes more and more of a factor for the Jayhawks.

Carlton Bragg is the other freshman who will be getting increased minutes as the Big 12 season goes on. He is a more polished offensive player at this point than Diallo and has already shown that he is able to force defenders out on him because of his ability to shoot the midrange jump shot. Another major plus is that Bragg excels in the high-low offense and is great at feeding the ball into his fellow big men.

Of course there are also the obvious reasons for Kansas having the makings of a championship team. Bill Self and the rest of the top notch coaching staff at KU have won in March before, and certainly can do it again. It will be very exciting to see how Self has the team looking heading into the Big 12 Tournament, and then March Madness, as it will undoubtedly be improved and hopefully hitting a stride at the right time.

Another important piece in the Jayhawks staff is strength and conditioning coach Andrea Hudy. For years now Hudy has done amazing work at KU with helping players to gain weight as well as strength and speed to reach higher potentials than anyone could predict they could before. This could be especially beneficial for slimmer players Svi Mykhailiuk and Diallo. Also, a huge factor is that during the regular season, Kansas has the best home court advantage in the nation at Allen Fieldhouse. Recently during the 109-106 triple overtime instant classic win against Oklahoma, (in a then matchup of two number one teams) sportscaster Dick Vitale said during the broadcast in a moment in the second half that Allen Fieldhouse was the loudest of any college basketball stadium he had ever been to at that moment. That’s really saying something for a guy who has been broadcasting since 1979.

Overall, there is no shortage of reasons to believe that this Jayhawk basketball team could make a run to the National Championship. Experience of both the coaching staff and the players, as well as young talent and depth will make KU a serious threat throughout the entirety of the year. Having the Big 12’s, and the nation’s, best home court advantage and fan base are just icing on the cake.