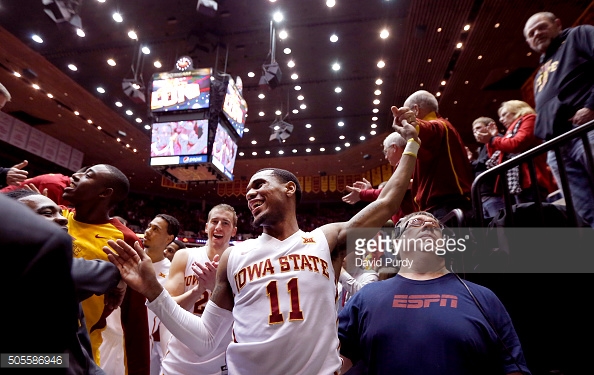 I caught the Sooner game in Des Moines Monday night, and you might think that’s odd, since I’m a senior and I should be in school. But I am spending my January in Iowa, covering the presidential campaign, particularly the Iowa Caucus and contributing to The Huffington Post during my time in the political battleground state.

Besides that, I tried hard with the SID’s and AD’s to find tickets for the group of students I am in Iowa with, but of course, the game was in high demand. Oklahoma had been named no. 1 earlier that day, and it was the first time since 1990 that the Sooners were unanimously ranked in the AP Poll and the USA Today Coaches Poll. Those variables made the matchup even more important, besides the fact that Oklahoma was able to beat the Iowa State Cyclones in Norman at the beginning of conference play in the early January.

Safe to say, my 13 classmates and I finished dinner quickly in time for the 8:00 p.m. tipoff. The Iowa State fans were quiet at the beginning of the game, even our server did not say much about her Cyclones t-shirt. I proudly wore my ‘beat everyone’ button at dinner, and was completely tuned-in from tipoff from the final seconds.

The Cyclones fans began to cheer louder as my friends and I starting shouting ‘Boomer!’ and ‘Sooner!’. Oklahoma was down 10 points at one point, and the energy was slowly building from the Iowa State fans in the bar.

Honestly, the retaliation from the Iowa State fans, in the bar made the 3-points made by Buddy Hield and the buckets by Isaiah Cousins that much better.

Unfortunately, I expected the Sooners to be able to sink three-pointer after three-pointer, gaining momentum with each play. But, just like Big Game Bob’s players, the basketball team saw a fatigue-filled game.

It was rough to see missed opportunities, missed shots, blatant mistakes and even more, the slipping momentum that had carried over from last week’s Kansas game.

The Iowa State fans could see the noticeable frustration on my face and chose to capitalize it, screaming ‘boomer’ and ‘sooner’ from across the room, which truthfully was hard to stomach. As the Sooners were unable to rebound for the continuous trailing by one or two possessions, the Cyclones did seem to enjoy putting me down from across the room.

I could see the older business-like Cyclones fans smiling at me when the Sooners were unable to make critical shots while the second half was ending quickly.

And let me tell you, those Iowa State fans loved having those moments where the Sooners were unable to make key plays in the final minutes of the game. Even fouls, the Cyclones fed off those moments of Sooner doubt, and as an Oklahoma fan across the room, it was even harder to stomach those moments with rabid fans across the way.

So, as football season is turning into basketball season and Sooner fans should hope two losses, one against Kansas and one against Iowa State, will fuel the team throughout the rest of the spring season. It worked for the football team, so let’s hope the basketball team can carry the torch.

For those Cyclone fans across the room from me, if I remember correctly, football did not treat you as well this past year… 52-16, enough said. Boomer.