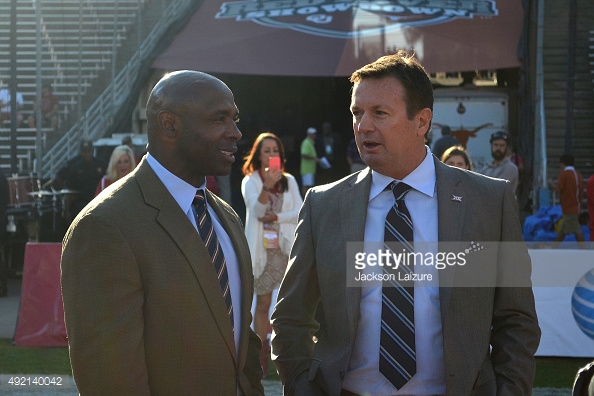 The Lone Star State is highly regarded as arguably the most fertile recruiting ground in the country for college football players. OK, Florida and California can make the same argument, but I still believe Texas holds the top spot.

With National Signing Day just over a week away, there are certain to be some changes in this list, but I believe the trend we are seeing, which is something we started seeing in the most recent batch of conference realignment, is that the Big 12’s stranglehold on the Texas recruiting scene is no more.

I used the Waco Tribune’s Top 100 players in the state of Texas, where they are currently committed, and I broke it down by conference, along with offense vs. defense.

Other (5 committed to Houston)

So yes, the Big 12 still has an advantage over the other Power Five conferences. Plus, as we know and would expect, the SEC is their greatest competition for Texas players. But, when you still look at the numbers and see that 25% of the Top 100 players (according to the Waco Tribune) are going to SEC schools, instead of Big 12 schools, it’s concerning.

On top of that, ten of those players are going to Texas A&M, which of course is no longer in the Big 12. Also, another former Big 12 member, Missouri, locked up a couple of players, both on defense.

So, that’s 12 players in the Top 100 in the state who are no longer playing in the Big 12. Add to that the infiltration of other SEC West teams poaching from the state as the SEC brand has expanded west, and it’s all clearly concerning for the Big 12.

If you aren’t completely sold on the problems for the Big 12. Here’s 24/7 Sports’ list of the top 100 recruits in the state of Texas, but unlike the Waco Tribune, which broke down the recruits by position, this is a ranking of 1-100.

Of the top 10 recruits in the state of Texas, only two are going to play in the Big 12, both at Baylor, in WR Devin Duvernay and OG Patrick Hudson. In fact, Houston, yes HOUSTON, has the #2 and #3 players, DT Ed Oliver and WR Tyrie Cleveland, joining the Cougars next season. Amazing.

So, some Big 12 teams don’t want Houston in their conference because they don’t want to prop up Houston in recruiting. Looks to me like Tom Herman’s staff is already kicking the Big 12’s ass on that front.

In the SEC, LSU has #9, S Eric Monroe, and #12, OLB Erick Flower, while Texas A&M locks up #10, DE Justin Madubuike. Alabama is locked up with #14, DT Kendell Jones, and Arkansas has reeled in #15, RB Devwah  Whaley. Finally, another Big 12 school, Baylor, has the #16 recruit in the state of Texas, WR Tren’Davian Dickson.

So, of the top 16 recruits in the state of Texas, Baylor is the only Big 12 school with any of them (3). Meanwhile, the SEC has 6 players in the top 16. I didn’t even mention the #1 player in the state, OT Gregory Little, who, yep you guessed it, is heading to the SEC to join Ole Miss.

Incase you’re wondering, yes, the Big 12 now has a problem recruiting in Texas, and it’s showing on the field. The Oklahoma Sooners, who in fairness to Bob Stoops has done more national recruiting lately, doesn’t have a player in the top-40 out of the state of Texas. Neither does anyone in the Big 12 other than Baylor, Texas, and TCU.

The problem is, the other Big 12 states of Oklahoma, Kansas, Iowa, and West Virginia, simply do not produce enough big time college football players to stay highly competitive. The conference needs to own the state of Texas. Lately, they haven’t.

If I were commissioner, I would add Houston immediately, to help the recruiting scene in the Big 12. The 12th team can be argued, but I would consider Cincinnati, Central Florida, and Colorado State. The Big 12 needs to stop being scared off by things such as propping up Houston, having a favorite lose a conference championship game, and scaring off the University of Texas. Unite as one, build the Big 12 brand, and get back to running the state of Texas. It’s their best bet to keep the conference healthy and strong.