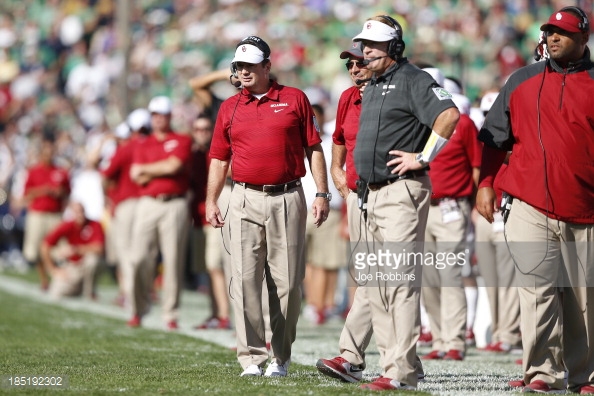 The Sooners came up short of the ultimate prize in the 2015 season, but not all is lost for the blue bloods who rep Crimson and cream. While it’s true the Sooners do lose a lot of talent, they return quite a bit and have some fantastic young guys coming in. The 2016 season may be an even greater one for the Sooners, and once again, there should be National Title expectations. The Sooners return Baker Mayfield, Samaje Perine, and Joe Mixon in what is the most dynamic backfield in all of college football. Of course, when you lose All Americans Eric Striker, Sterling Shepard and Zach Sanchez it does make you wonder how this squad is not only going to get back to where they were, but to improve! That’s a fair question, and to be quite honest, while the Sooners do have a solid recruiting class coming in, if they don’t make a serious move… and quickly, they will not end up with a class ranked in the top 15. Meanwhile, if things ended on Monday night, both Baylor and TCU would have top 15 recruiting classes. Needless to say, with one week left, there is work to be done for Bob Stoops and his staff.

Earlier in the week the Sooners found themselves landing a verbal commitment from Velus Jones, a very talented 4 star recruit who was previously committed to USC.

I have made my final decision to attend the University of Southern California and I’m ending my recruitment FIGHT ON!

The guy was everything the Sooners were looking for in a wide receiver after losing seniors Durron Neal and All-American Sterling Shepard. The Sooners had already done some work in replacing those pieces by earning the transfer from Penn State wide receiver Geno Lewis, and for the second consecutive year picking up the top rated JUCO wide reciever in Ryan Parker (4 stars).

Everybody welcome in OUr newest go getter! @GENOALLDAY7. Get excited Sooner Nation!

However, Velus Jones flipped his script just 24 hours later switching back to the Trojans. While this puts a bit of a hole in the Sooners plans, we do wish the young man good luck in Los Angeles.

If you thought losing a guy like Jones was tough, wait until you hear this: The Sooners lost two other gems from their class this week… and it as to their biggest rival!

Chris Daniels, a four star defensive tackle, is likely joining the Texas Longhorns, while Nebraska picked up 4 star linebacker Pernell Jefferson, who also decommitted from the Sooners this week. It is tough to lose 3 of your top 5 recruits in such a short time, but the Sooners still hold a top 25 spot in their recruiting class rankings, and it speaks of their hard work, and depth of this class with about a week to go before signing day.

Also, the Sooners are major players for two very key guys down the stretch.  4 star cornerback Jared Mayden has limited his decision down to Alabama and Oklahoma and there is no indication on his lean at the moment. Caleb Kelly, a 5 star linebacker from California, seems to have limited his choices to Oklahoma and Oregon. Apparently, he is believed to have a heavy lean towards the Sooners, who desperately need him after losing Bond, Striker, and Alexander to this year’s NFL draft.

While it’s not all cupcakes and rainbows, keep in mind the Sooners are virtually bringing in two young quarterbacks to replace Baker Mayfield in 2017 (assuming the Mayfields are unsuccessful in their venture to gain another year of eligibility) in Kyler Murray, a Texas A&M transfer who is a former 5 star, and 4 star Austin Kendall. Those two may not have immediate impact on the field this year, but both will have an opportunity to be great when the time comes.

Also, look out for a pair of linebackers to make an immediate impact for the Sooners. OU added JUCO teammates Kapri Doucet and Emmanuel Beal, who are perplexingly only considered 2 star recruits, but play well above that when you put on their tape. Plus, keep in mind Ricky DeBerry and Arthur McGinnes are expected to make some noise from the 2015 class this season after redshirting last season.

Overall, things look good in Sooner-land. That being said, we are likely in for a wild and crazy finish to recruiting, which we have become accustomed to seeing from the Sooners. Not only that, but the players returning should give OU a fantastic edge next season when they try to repeat as Big XII champions and compete for the National Championship once again.