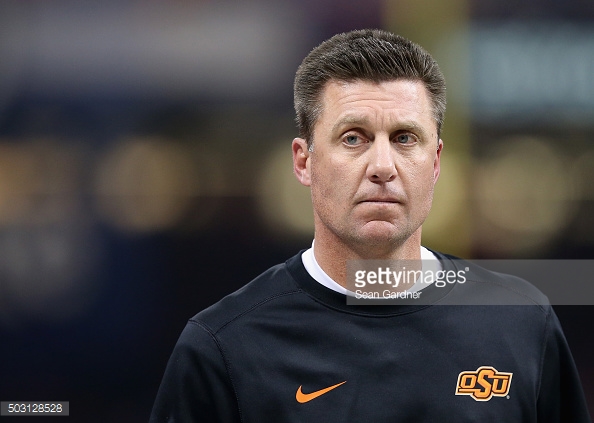 The dust has finally settled on Oklahoma State’s football season, and looking back it’s hard to not be disappointed in the way it ended. Three straight bad losses after starting 10-0 never leaves a good taste in the mouths of fans. Especially after the Cowboys manhandled TCU and everyone’s expectations shot through the roof, mine included.

Until that point I fully understood that OSU had squeaked by more than a few teams and were very lucky to be undefeated, but after watching them take the Horned Frogs behind the wood shed I was fully on board. I was convinced the team had finally turned it on and that they were headed to the playoffs! Even after needing a comeback in Ames to beat the Cyclones I chalked it up to ISU always playing hard at home and the Pokes looking ahead to Baylor!

Then the Baylor game happened.

Then the Sugar Bowl.

Three games where OSU was badly outmatched. The Cowboys were obviously not even in the same class as those teams, and it was embarrassing. But, as upset as people were they seemed to forget how good things have been under Gundy. He has 94 wins in 10 years. He’s won a Big 12 Championship, was one play away from a second Big 12 Title in 2013, and then one game away from a third last year. That would’ve been three Big 12 Championships in six years for a school that hadn’t sniffed a conference championship in decades.

He took the Cowboys to two Cotton Bowls, the Fiesta Bowl, and the Sugar Bowl in the span of a few years. He has helped raise the profile of Oklahoma State to a level that it hasn’t been since 1988 when Barry Sanders won the Heisman.

Does that mean Cowboy Nation should be content? Of course not! There’s plenty of room for improvement, and it needs to start next year.

I’m an on again off again fan of offensive coordinator Mike Yurcich. Sometimes he seems to be a genius and sometimes he makes me want to pull my hair out. He’s obviously found his quarterback in Mason Rudolph, a serious rising star if he can get some help from the running game. This year’s rushing troubles weren’t really Yurcich’s fault. The offensive line was terrible, the result of a bad break up with Joe Wickline coupled with a bad hire to replace him. Hopefully, with the second year under Greg Adkins, the unit will show marked improvement. The running backs had absolutely zero room to do anything, and neither Carson or Childs is the kind of player that can make something out of nothing every single time. Give Yurcich credit for finding rushing yards in creative ways, like reverses and with the Walsh package.

The defense needs to change some things as well. I’m a huge Glenn Spencer fan but he got out-schemed a lot the second half of the season. I understand the team lost some depth due to injury, and the team teams we faced the second half of the season were different animals that the ones they faced in the beginning, but OSU had no answer for Baylor’s third string quarterback, or the Perine/Mixon combo form Oklahoma. When Ole Miss went uptempo in the Sugar Bowl, Spencer’s unit looked like they had never seen that before despite practicing against their own team’s up tempo spread every day.

All in all, it starts with recruiting. Baylor, OU, and Ole Miss simply out muscled the Pokes in the trenches. Part of that is the system OSU runs, where pass blockers are more valued than run blockers. Part of it is the conference they’re in: big time defensive players don’t want to play in the Big 12 where they spend all their time chasing mobile QBs. Part of it is, in my opinion, the current staff isn’t as good at recruit as Gundy’s staffs of the past.

There’s no closer in this group. In the beginning, Gundy had Joe Deforest who could go into Texas and scoop up big time recruits. Every offensive lineman in the country would at least consider going to play for Joe Wickline, who was considered one of the best line coaches in the business. Gundy has to find a way to get recruiting over the hump or the best he can ever expect is a maximum of 10 wins a year.

(On a side note, Joe Deforest was recently let go by West Virginia, and Gundy is in need of a special team coordinator, Deforest’s old job at OSU. Make the call, Gundy!)

So there’s no reason to jump ship yet, Cowboy fans. Next year will tell us a lot. If the same struggles are there, maybe it’s time for Gundy to do some house cleaning like Stoops did down in Norman. But honestly winning 10 games with this team may have been the best coaching job we’ve ever seen in Stillwater history.

So yes, get frustrated at bad games and disappointing seasons because you expect more of the team, but remember that those expectations are high because of Mike Gundy. Until then try to remember that you are witnessing the greatest time in Oklahoma State football history, something not many fan bases can say. So try and enjoy it!