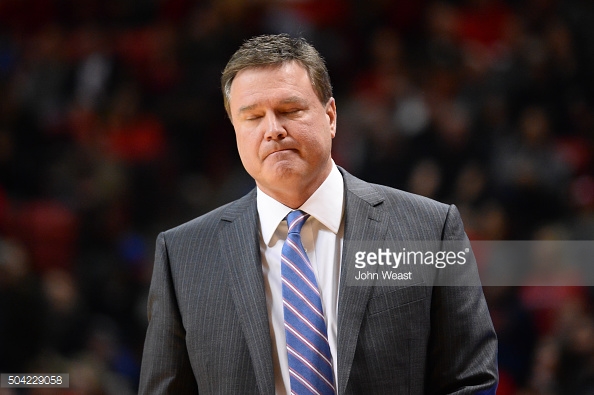 With Big 12 play heating up, Kansas still has many of the same flaws that it had at the beginning of the season. At Big 12 Media Day in Kansas City this fall, Bill Self mentioned that his teams’ biggest issue early would likely be the inability to score down low. In the first month of the season, Perry Ellis was the lone big that had the ability to score. However, fans were convinced that prized freshmen, Cheick Diallo, would fix this flaw once he was cleared to play by the NCAA.

As of now, Diallo is struggling to find any minutes in Self’s rotation, and junior forward, Landen Lucus, is a starter that has virtually no ability to score. While fans have been upset with the rotation, Diallo gets lost on defense way too often, and the speed of the game is just too fast for him right now. The other freshman big, Carlton Bragg, has shown the ability to score for the Jayhawks and could play a key role for them down the stretch, but he is also in Self’s doghouse because he gets beat on defense too often, and he’s currently lacking the strength to be a good rebounder.

Another problem that Kansas faces down the stretch in the tough Big 12 conference is the guard play. The two-point guard system that the Jayhawks are using has been inconsistent. Devonte’ Graham seems to be the X-factor for the Jayhawks. When Frank Mason is struggling, it is usually a product of him trying to do too much when Graham is not playing well. Graham is only a sophomore, but if KU is going to win its’ twelfth straight Big 12 title, he is going to have to step up his game.

For opposing coaches, the formula for beating the Jayhawks is not a complicated one. If you double team Perry Ellis in the paint and force Landen Lucus to score, you will eliminate the big men. If you don’t allow Mason to get in the paint and play good defense on Selden, then Kansas will have to rely on Graham more, who has not been a reliable offensive weapon for the Jayhawks. Coming into the season, one of the biggest strengths for Kansas was supposed to be their depth and balance. As of right now, these seem to be areas that need major improvement before March.

When asked about why Self is not playing the freshmen big men over guys like Mickelson, Traylor, and Lucus, he always talks about how he trusts the veterans more and sides with experience over the youth and raw nature of Diallo and Bragg. This may be the case now, but over the next month or so, do not be surprised when Bragg starts taking minutes away from the upperclassmen. When it comes to games against quality opponents with athletic front courts, Kansas simply cannot afford to play big men that have no ability to score down low.

Make no mistake about it: Kansas has the ability to beat any team that they play this year. They have already beaten some of the most talented teams in the country this season. I still believe that they will win at least a share of the Big 12 title and should be a Final Four team. However, if Self is stubborn about playing the freshmen and the obvious holes in Kansas’ game are not straightened out, this could end up being a very disappointing season for the Jayhawks.