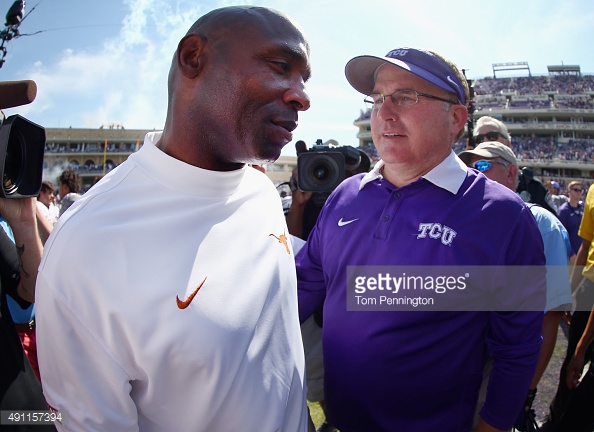 1) Texas: This is just a no brainer. According to some recruiting outlets, the Longhorns ranked in the 40-50 range a week or two ago. Then they began the day in the 30-range, before launching themselves up the board and into most people’s top-10 by the close of business. UT started the morning fast with top recruits such as DL Chris Daniels (Euless, Texas), OLB Erick Fowler (Manor, Texas), WR Lil’Jordan Humphrey (Grapevine, Texas), and DB Brandon Jones (Nacogdoches, Texas). Plus, do you notice a trend? They were all TEXAS kids! This is enormous for Charlie Strong and his staff that he was able to keep some of Texas’ best talent in state and prevent many from going to the SEC. It turned into a fantastic day for the Texas, and as a result the Big 12.

2) Baylor: Art Briles said on Wednesday, “Arguably the best class in Baylor history. Certainly best we’ve had. It’s a big deal. Signed some extremely good football players.” That couldn’t be more true. Baylor added some of the great players, including OL Patrick Hudson and WR’s Devin Duvernay and Tren’Davian Dickson. Briles is starting to capitalize on Baylor’s recent success and it’s turning into top recruits. But, not to be overlooked, Briles is starting to add more talent on the defensive side as well, including DT’s Bravvion Roy and Jeremy Faulk, along with DE Brandon Bowen, and DB Parrish Cobb. If Baylor can even get the defense up to the standards of the offense, watch out!

3) TCU: Just like Baylor, TCU is starting to build off of their success of the past couple of years and have added a really nice crop of players that most services rank in the top 20. Also, 15 of the 22 players signed by the Horned Frogs hail from the Lone Star State. It’s the top-rated class ever for TCU, and includes ten 4-star recruits – RB’s Darius Anderson and Sewo Olonilua, defensive tackle Ross Blacklock, defensive end Isaiah Chambers, safety Innis Gaines, receiver Isaiah Graham and offensive tackle Austin Myers, along with three junior college signees – receivers Parker and Taj Williams and linebacker Tyree Horton. Also notice, of those 4-star players, there is an excellent balance, with 6 offensive players and 4 defense. Great job by Gary Patterson.

4) Iowa State: New head coach Matt Campbell backed up his hire with a sprint to the finish line on the recruiting trail. Iowa State is never going to haul top-25 classes. But considering how bad the program has been, to go along with a coaching change, Campbell blew away my expectations. Earlier this week ISU picked up a commitment from TE Chase Allen, who had offers from Michigan, Florida State and Nebraska. But, the cream of the crop of this class is WR Deshaunte Jones, who picked the Cyclones on Monday over Georgia Tech, Cincinnati and others. Here’s to hoping Campbell can be the guy to help turn around this program into at least a competitive Big 12 program that fights each season for a bowl berth.

I would like to see Kingsbury’s class ranking higher than the 28-35 range I have seen it in most recruiting circles. But, that being said, his classes went from around 50-ish two years ago, to the 45-range last year, and continued to improve in this cycle. It’s a big class as well, with 24 players… and the best part? 13 of those 24 players are defensive pieces! Naturally, the prizes in the class are offensive weapons like WR’s Derrick Willies and T.J. Vasher, but every other player coming to Lubbock is at least a 3-star, which gives Kingsbury lots of depth. On that defensive side, I like how Tech added two DB’s with size in DaMarcus Fields and Desmon Smith, both over 6′ tall. Size at cornerback in the Big 12 is the best recipe for defensive success.

1) Oklahoma State: I know Mike Gundy says he never looks at the rankings of recruits. But come on, really? This class is ranked between 45-50 my most services, and that’s crap for a program that has had this much success in recent years. I get it, Justin Blackmon, Brandon Weeden and others were not big time recruits. Every Oklahoma State fan will tell you that. But, guess what else? Every year Alabama and Ohio State have top classes, and they compete for National Championships.

The Cowboys did get good news with 4-star LB/Safety Calvin Bundage committing and they do have the top recruit in the state of Oklahoma coming their way in OT Tramonda Moore. But, Gundy needs to step things up in the recruiting trail. The success has been there on the field, the facilities are top notch, Stillwater is a great college town… but the recruiting numbers have to get better to consistently compete with the top of the Big 12.

2) Oklahoma: Bob Stoops is paid to be one of the top-5 coaches in America. That also means he should be recruiting like one. I don’t want to hear about how he “filled his needs” and what not. Considering OU was coming off an appearance in the College Football Playoff, Stoops and his staff had a ton of momentum and even after 5-star LB Caleb Kelly committed late on Wednesday, that only moved OU into the top-20 of most recruiting services. It’s just not acceptable.

Also, DB Parrish Cobb flipped from OU to Baylor, and another DB, Jared Mayden, chose Alabama over OU. Considering the loss of CB Zack Sanchez, those two were real stingers. In addition, only 4 of the Sooners 21 recruits come from Texas. I know Bob Stoops talks about recruiting nationally. But, when the most fertile recruiting ground is right down the road, why go 1,000 miles away? It’s easier to convince a kid who’s parents can drive to the game, than it is a kid who’s parents have to take connecting flights to see their kid play. I respect his national approach, but it’s gotten to be too much. Bob is outsmarting himself on this one.

Neither Winner, Nor Loser

1) West Virginia: I’m sure most WVU fans are pretty excited about their team considering some really good additions in DB Kyzir White (brother of Kevin), and a few other 4-star players in JUCO RB Justin Crawford, WR Steven Smothers and OLB Brendan Ferns. The class is heavy on DB’s, which is great for the Big 12, but the front 7 still needs a lot of improvement in Morgantown. Also, just 1 player from Texas? I know WVU is a half-a-world away, but considering Holgorsen’s ties to the Lone Star State (coached at Tech, Houston, and OK State), I figured he would have had more success recruiting that area instead of the typical WVU recruiting territory of PA, MD, and OH.

2) Kansas: Can you really call Kansas a loser at this point? Look at what David Beaty is working with here… and it’s a damn hard job (by far the hardest in the Big 12). Beaty, who has plenty of ties to Texas, did land 10 of his 17 players from the state. 14 of the 17 are high school players, a fine ratio unlike the heavy JUCO route formula Charlie Weis failed with. The class’s most immediate impacts are on the defensive side with LB Miciah Long and JUCO DB Stephan Robinson likely to see the field this fall.

3) Kansas State: Remember, I didn’t do these winners/losers based on whose class was ranked higher. But, Kansas State is right in the middle because based on their realistic expectations, this class is acceptable. K-State’s only 4-star player is a top-15 quarterback Skylar Thompson, and we all know the ‘Cats desperately need help at the position. Plus, they landed two offensive linemen that can play immediately, and Bill Snyder needs help there with 4 open spots along the line. JUCO transfers Abdul Beechman and Breontae Matthews could find themselves starting week one. On top of that, you know Snyder is the best at finding diamonds in the rough.

2/2/16 Big 12 Morning Headlines
HCS Interview: What’s up with Bill Self and Brannen Greene?
To Top