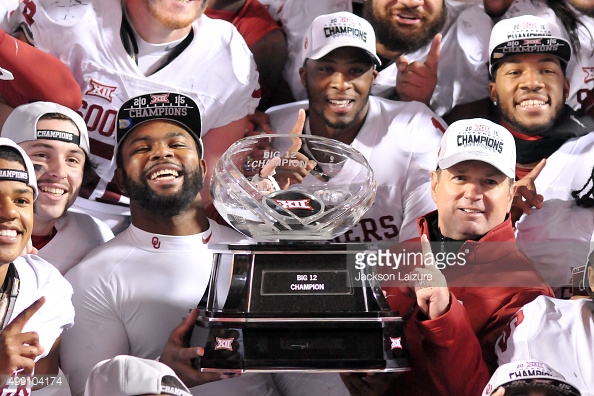 The Oklahoma Sooners finished with a flurry on the recruiting trail this season, and despite what the “composite rankings” might say, the reality is Oklahoma deceptively signed one of the best classes in the country.

If you go by all the major recruiting sites (ESPN, 247 Sports, and Rivals), the Sooners finished in the top 20 according to only one site. Not only that, but each site had them with the #4 Big 12 recruiting class, ranking behind TCU, Texas, and Baylor. Before we move forward, right now I will just tell you, they are all wrong. Oklahoma actually had the strongest class in the Big 12 and it will show in the coming years.

First and foremost, Oklahoma recieved two transfers who do not count towards recruiting class composite rankings. The Sooners picked up 5-star QB Kyler Murray from Texas A&M and 4-star WR Geno Lewis from Penn State. While, they don’t count towards your class, they do count against your scholarship count and because the Sooners lost only 11 scholarship, this class was naturally going to be smaller. By adding Murray, Lewis, and late night pick up 4-star WR Mykel Jones (registered after composite rankings ended) Oklahoma easily finishes in the top 10 in this seasons rankings.

Not only does Oklahoma have the best recruiting class, but they also claimed the highest ranked player of any Big 12 team! Linebacker Caleb Kelly is the only 5 star commit in the Big XII this season, and should make an immediate impact for the Sooners in 2016.

If there is a disappointing spot in this class for the Sooners it would be that 4-star CB Jared Mayden, who was believed to have a heavy lean towards the Sooners as late as Tuesday evening decided on Alabama, only 24 hours after 4-star CB Parrish Cobb flipped to Baylor. Oklahoma desperately needs to find the right combination to replace the productive Zack Sanchez, who declared early for the NFL draft.

While the Sooners preferred Mayden, they wouldve been happy to settle with Cobb, who had been committed to the Sooners since August. The Sooners did land their other 4-star CB target Jordan Parker, who has serious upside. OU actually has a pretty deep secondary, however both Steven Parker and Jordan Thomas could very well declare for the NFL draft in 2017 and it would be nice to have insurance going forward. IF the Sooners failed anywhere, this is where it was. They wanted Cobb and Mayden badly and got neither.

Well, let’s end this on a positive note Sooner fans, Oklahoma landed the best linebacker, and wide receiver in the class. Caleb Kelly (5-star LB) and Mykel Jones (4-star WR) have serious star power potential and are very likely to get immediate playing time. Both of these players are ranked #1 in at least 1 major recruiting site’s player position rankings, so they are huge additions for what is the nation’s most underrated recruiting class.

Speaking of underrated, the Sooners landed a few diamonds in the rough. JUCO teammates Emmanual Beal and Kapri Doucet are a pair of 2-stars who play much bigger than on tape and will likely make their presence known in 2016 in what should be another deep linebacking corp for Oklahoma. 3-star defensive end Jon-Michael Terry has received nothing but endless praise from the Sooner coaching staff; Stoops went as far to say, “He is unbelievable. By far the most underrated recruit this season.”

The future is bright in Norman, both in the immediate future and beyond. Oklahoma is back and here to stay. The Big XII favorites closed strong, and have the best class in the Big 12.