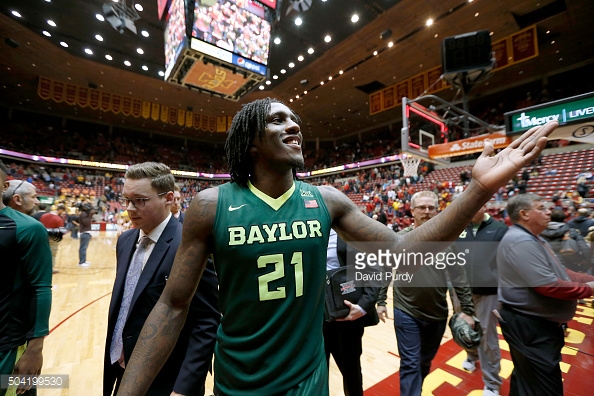 I had hoped to start writing this article after what would have been a great three days of basketball for Baylor, by ending the first half of the Big 12 season on a high note after beating Georgia (non-conference) and then Texas. But, just as in football, Texas spoiled all the fun in Waco.

As upset as I was about losing to Texas at home, I honestly liked the win against Georgia more than I hated the loss against Texas.

Georgia isn’t exactly a powerhouse team (not even ranked) but it’s a non-conference, power five game, which Baylor shouldn’t have lost. The thing about Big 12 games is that once they start, that’s about all you get until the end of the season. And while it helps if you’re team to be in a strong conference like the Big 12, those don’t really matter in the tournament. March Madness usually pits you against new opponents. Games like Georgia are important because they keep you in check. It’s a fresh team who you don’t play every year, so it’s more reflective of the coaching staff and the squad, considering the unfamiliarity with the opponent. With this being their last non-conference game of the year, and having lost the last one to A&M, it was a nice bounce back for them.

Just to be clear: I’m not saying that because Baylor beat unranked Georgia by 10 at home, they’re going to take home the National Championship on April 4. But I’m also not saying that you should write them off just because they lost to UT at home this past week, and also have losses to OU and Kansas. While losses to teams like OU and Kansas are easily more forgivable because of their ranking and stature in the Big 12, I don’t believe the loss to Texas (who is on a little hot streak of their own) was that bad. Rico Gathers fouled out with a crucial minute and a half to go, and the Longhorns got a lot of help from the three ball. Plus, these things just happen sometimes. The Bears lost, and it’s nothing more than that.

So with three losses after the first half of Big 12 play, there are many positives to take away. Being strong on defense has helped out the Bears a lot and they look stronger than any time I can remember. Prince, Gathers, and Motley are all getting their share of blocks, defensive rebounds, and even some steals. They definitely need to keep it up if they want to finish strong. The other big thing I would take away from their first half of Big 12 action would be that they are capable of winning on the road. Anytime you’re on the road, especially in conference, it’s a very tough environment to be in. The wins at Iowa State, and Oklahoma State were really good, hard fought wins. The Iowa State game especially revealed how good of a coach Scott Drew is, with him leading the Bears to the comeback.

While there were many positives to take away from the first half of the season, there is one big thing I believe Baylor has to do to convince me they can actually compete in March. Between the OU and Kansas games, they have to win at least once. Both of them are in the top 10 right now, and will probably close out the season that way as well. I would prefer this happens in the regular season so that you don’t finish 0-4 against top 10 teams, but I’d definitely settle for knocking either of them out in the conference tournament, just to take that as momentum heading into the NCAA’s. If they can’t close out at least one of those games, then no matter how good they are against new teams (early and middle tourney games), they’ll lose to a top side eventually (later games). If they can do this at least once, it’s enough for me to believe they can make it to Houston on April 2 for the Final Four. Maybe that’s stretching it a little bit, but heck, Scott Drew has taken teams with less talent than this one to an Elite 8. Sic ’em!

Oklahoma Sooners bring in ‘deceptively strong’ 2016 recruiting class
Mark it down: West Virginia should be Big 12 favorites
To Top