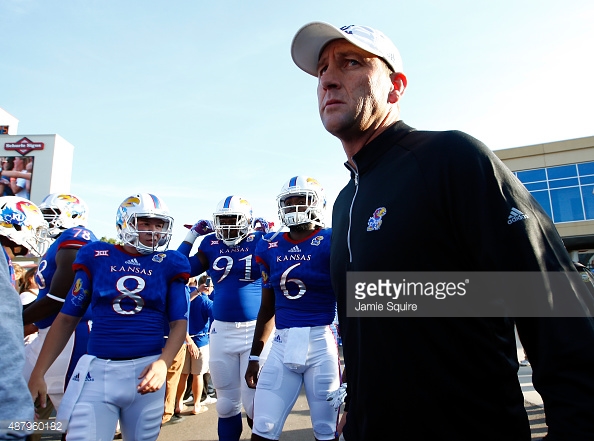 From the opening press conference when he was hired, Kansas head coach David Beaty has preached the importance of recruiting and has spoken about how he and his staff are going to work their tails off on the recruiting trail to bring in the guys that will become great Jayhawks. In his first class, most of the major recruiting sites would tell you that Beaty struggled to bring in Big 12 caliber talent. Obviously, as of right now it is impossible to judge whether the class is a bust or success. However, it is easy to look at this class and see that it will fill many of the holes that Kansas has had in the last several seasons. It doesn’t take a football expert to understand that Kansas has been getting crushed in the trenches in the past few seasons. The offensive line was much too small and simply outmatched against the majority of opponents that the Jayhawks faced last season. The defensive line struggled to put up any pass rush against Big 12 foes, and the best pass rusher from last season, Ben Goodman, was a senior. To fill these obvious holes, the Jayhawks signed four offensive linemen and three defensive linemen.

There is no doubt that Kansas is not the most attractive option to recruits right now. Any school in the Big 12 has more to offer than the Jayhawks. If you were a kid with offers from schools that will provide much more immediate success, have better facilities, and much more stability than Kansas has, why would you choose to become a Jayhawk? This message became clear when a local defensive end, Amani Bledsoe, choose to attend Oklahoma over the Jayhawks, even when he lives in Lawrence. Beaty has made it clear that getting the best talent from the state is vital to Kansas’ success, so missing out on Bledsoe was very discouraging to many fans. However, I believe that landing Bledsoe would have put the Jayhawks way ahead of schedule. It is going to take the Jayhawks time before they start landing this kind of talent. They need to show recruits that they are capable of having success before they decide to play at KU. Most recruiting experts did not see Bledsoe even including Kansas in his top 5 schools, so for it to come down to Kansas and Oklahoma could be viewed as a step in the right direction in itself.

Make no mistake about it; if Kansas is going to compete in the Big 12, they are eventually going to have to land the best talent from the state. It is unacceptable that big time programs see Kansas as a state that they can come to and pluck top guys from without much competition. But for Beaty, there are no magic words that he can say to these top guys that will make them fall in love with the idea of playing for the Jayhawks. It is going to be a process that takes time in order to win these guys over, and the first step in this process is the toughest step, proving that Kansas is going to be competitive year in and year out in the Big 12.

While Kansas will likely be graded as the worst recruiting class in the Big 12 by recruiting websites, I believe that they found some really good, underrated talent. When Kansas has had success in the Mangino era, the recruits that they landed were never top rated players. For example, Aqib Talib was a 2-star cornerback that many believed would convert to linebacker. At Kansas, you are never going to land the greatest recruits, but it is crucial to land the right recruits. While it is impossible to know which recruits are going to have great careers at Kansas, I’m going to take a swing at five players you should look forward to seeing next fall.

1. OT Antione Frazier– This is a kid from Huffman, Texas that had interest from many of the top Big 12 schools. According to Beaty, when Frazier took his visit to Lawrence, he was getting calls all the time from schools like Baylor and Texas trying to get in on him late. Like many great offensive tackles, Frazier is a big kid that can really move. Before playing football, he was a standout on the basketball court.

2. CB Kyle Mayberry– While Mayberry is not a big kid (5-11, 163 lbs), he is very fast and has all the confidence in the world. He could become a fan favorite very fast on campus, as he is already doing his part in recruiting talent to KU. He was the top rated CB in Oklahoma and turned down some impressive offers to become a Jayhawk. With the lack of depth at CB, look for Mayberry to get a chance at some playing time as early as next fall.

3. LB Maciah Long– Long might be the most intriguing prospect in Kansas’ class. While he has the size of a LB and projects to play LB in the Big 12, Long played quarterback at the highest level of high school football in Texas. Long was outstanding as a senior, and quarterbacked North Shore to a win in the 6-5 A Division I championship. He was the MVP of the championship game. Beaty has hinted that it is possible that KU will use long as a QB in short yardage or goal line packages. While he has never played LB before, Long might have the highest ceiling of any of the Jayhawk signings from a size and talent standpoint. Of all of the Kansas signings, Long held the most impressive list of offers.

4. OT Chris Hughes– Hughes is a signing that offers tremendous size for the Jayhawks (6-5, 260 lbs). His brother plays at Texas, and Hughes had interest from several other Big 12 schools. He wasn’t able to play in his senior season, as he tore his ACL at a Longhorn recruit camp. Beaty offered him shortly after his injury, and stuck with Beaty even after other schools tried to get in on him late. Both Hughes and Frazier offer the size and skillset that is needed to be a tackle in the Big 12.

5. WR Evan Fairs– The only WR that the Jayhawks signed could turn out to be a good one. From the Houston area, Fairs decommitted from Maryland and choose KU over Illinois very late in the recruiting season. Fairs offers good size for a WR (6-3, 185 lbs), and he has breakaway speed. With the late signing of Fairs, Kansas should have good depth and speed at the WR position.

Mark it down: West Virginia should be Big 12 favorites
Is there a double standard involving the Kansas State fan base?
To Top