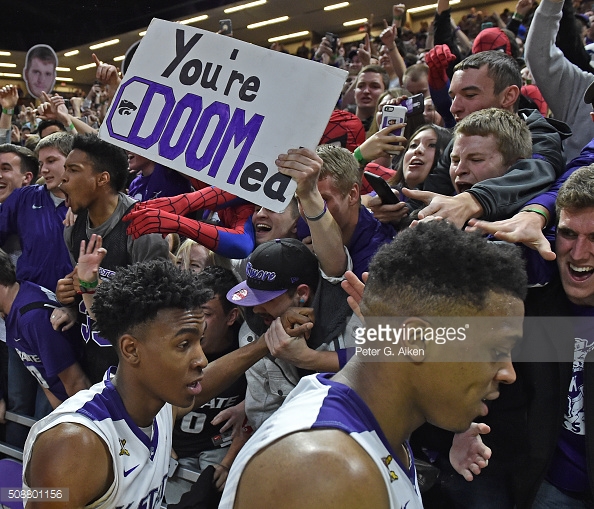 The Kansas State student section as well as their men’s basketball team is owed an apology from the university administration and Big 12 commissioner Bob Bowlsby for the injustice that occurred Saturday evening when the Wildcats toppled the #1 ranked Oklahoma Sooners.

Everyone remembers the horrible injustice that the University down the road had to endure last year after falling to the Wildcats in the Octagon of Doom. While the incident definitely went too far, it was horribly overblown by most of the media and the local law enforcement that treated the student that bumped into Kansas forward Jamari Traylor on the court after the game like an armed and dangerous criminal.

During the last television timeout of the game the public address announcer informed the crowd that they were forbidden from coming onto the floor, much to the dismay of the sellout crowd. There is little doubt that the students did not rush the court because they chose not to, because I don’t believe they could have all been stopped if they did in fact choose to rush the court. So while they should be given credit for that, the entire idea of not letting paying college students celebrate a huge win with their team is absurd. These are students that will mostly graduate buried in debt, part of which will be their tickets that these students buy.

Court storming certainly has its place in college basketball and some common sense must be brought back into the mix. There are a few things that all college students should be able to enjoy, and celebrating a victory by their team over the #1 overall ranked team in the country is one of them.

In May of this year, Bowlsby and the Big 12 announced that they would come down on schools that allow court storming to happen. Yet, when they had their first true test of this policy this season they laid down and let an incident way worse than the one that happened in Manhattan go without any punishment.

In December of last year, the Iowa State Cyclones completed a remarkable comeback to beat their in-state rival Iowa Hawkeyes. In the melee during the court storming Randy Peterson of the Des Moines Register was left with a compound fracture of his leg. The league said the way Iowa State handled the postgame celebration was consistent with Big 12 guidelines for sportsmanship and ethical conduct, adding that it considers the matter resolved.

Just a few weeks later the team down the road from Manhattan lost to Oklahoma State, while it was a small crowd for the game, they still rushed the court. In Morgantown just a week later, KU lost again and the court was stormed there … guess how the Big 12 responded? Yep, no punishment.

So what are Big 12, or more importantly Kansas State fans supposed to take from the glaring double standard? Obviously there is no place for assaulting players, coaches or officials. But apparently the rules are applied differently based on the school in question. So, I hope that sometime the athletic administration at Kansas State lets up soon and allows their students to be just that.

More important than the lack of court storming on Saturday though was the win. The Wildcats notched that all important first “quality win” of the season. While there is still a ton of work to do in order to get their named called on that Sunday in March, they had to start somewhere.

Weber threw a curve and switched up the lineup and started for this game and I would say it worked. Freshman Dean Wade and Senior Justin Edwards came off the bench. Wade finished with 17 points and 7 rebounds while Edwards threw in 11 points and 7 rebounds, but the star of the night was clearly junior Wesley Iwundu.

Iwundu logged 22 points, 7 assists and 3 steals in 38 minutes. But more importantly he played outstanding defense on one of the top candidates for the player of the year award. Buddy Hield never got an open look at the basket. While you can’t shut down a player like Hield, Iwundu made everything difficult for him. Chasing him all night and getting in his face every time he tried to make a play, getting in his passing lanes and forcing Hield into 3 turnovers.

The Wildcats welcome the 21st ranked Baylor Bears into the Octagon of Doom on Wednesday night. Looking to defend their home court and notch another “quality win” to start building that resume. EMAW!

Who are the prizes of the Kansas Jayhawks’ 2016 recruiting class?
Enter to win a FREE Kansas State Wildcats tee shirt!
To Top