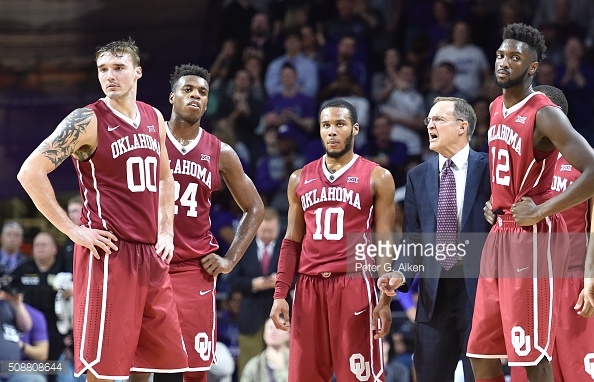 Oklahoma has hit a rough patch in its last two games falling at Kansas State and beating Texas at home thanks to a three by Buddy Hield with 1.4 seconds remaining for a 63-60 win. In these last two games, the Sooners have shot just 15 of 46 from three point range, which has to make head coach Lon Kruger and the OU fans worry about how this team will react if this problem surfaces in March.

History shows that teams who are so heavily reliant on three point shooting rarely win a Championship. However, this isn’t a typical college basketball season in terms of great teams. There are no great teams this season. Example A: In 14 weeks of the college basketball season, six different teams have owned the #1 spot. Last season, it was understood that Kentucky, and maybe Duke or Wisconsin, were the only likely contenders for a National Title. Lately, you’ve heard most college basketball experts suggest that there are anywhere from 15-20 teams who could win the championship this season. So, if there is going to be a year where a team like Oklahoma, who relies heavily on the three ball, wins it all … this could be the year.

The Sooners have also shown the ability in past games to get to the rim or free throw line when struggling from the perimeter. Recently in the game against Texas, Buddy Hield shot just 7-18 from the field, but was 10-11 from the free throw line. As a team, OU was 14-18 for the game, while Texas shot just 6-10. In their win over TCU last week, the Sooners were 18-22 at the line, good for nearly 82%. The ability has been shown to adjust when the shots aren’t falling from the outside. But, it remains to be seen how consistently the Sooners are willing to do this.

The Sooners badly need guys like Christian James and Dinjiyl Walker to step up and give a consistent contribution, so than when guys like Hield, Cousins and Spangler head to the bench  they can feel at ease resting them some. Those three players are all averaging over 33 minutes per game. Eventually everyone gets tired and you don’t want those three, along with Jordan Woodard tired when the NCAA Tournament rolls around, especially in the 2nd game of the weekend (either 2nd round, or Elite 8 game).

The Sooners certainly have the experience and offense to be capable of a deep run in March, but the concerns of relying on three pointers, lack of depth and fatigue are real concerns. The Sooners have looked a step slow in their last two games and it will be interesting to see how they play when Kansas comes to Norman on Saturday for a rematch of the best game of the year in college basketball so far this season. For what it’s worth, my money is on the Sooners. Although that’s more an indictment on the recent play of KU, rather than confidence in OU.

Is there a double standard involving the Kansas State fan base?
Why saying goodbye to Barnes was ‘Smart’ for Texas hoops
To Top