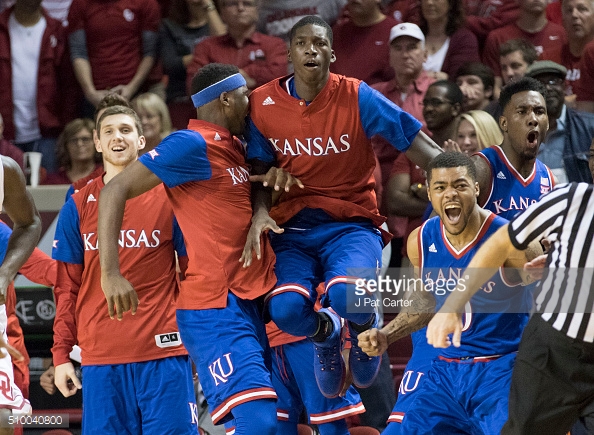 Here we go again. Basketball in the Big 12 has been more competitive than ever this season. If there were ever a time Bill Self and his Jayhawks to be dethroned of the Big 12 crown, it would be this season. In a conference that currently has six teams ranked in the top 25, the Jayhawks continue to find ways to stay ahead of the pack. While Kansas does not always win in the most conventional of ways, they always seem to have two ingredients that other Big 12 foes lack: depth and balance.

This past Saturday in Norman, Kansas won its’ biggest game of the year. Oklahoma is a team with tremendous guards. Buddy Hield almost dropped 50 points on the Jayhawks in the first matchup. While Hield was the most talented player on the floor, Kansas had Devonte Graham step up and actually outplay Hield. This was just another example of a Kansas team that knows how to find ways to win. Perry Ellis didn’t score a single point in the second half, Frank Mason fouled out of the game, and Wayne Selden finished the game going 2-9 with only 6 points. If you asked anyone before the game what would happen with Ellis, Mason, and Selden not having good games, they would expect the Sooners to beat Kansas by double digits. This was a game that displayed Kansas’ toughness, which is an element that has been missing down the stretch for the Jayhawks in the last few seasons.

While the Big 12 race is far from over, the Jayhawks are now in a good position to at least clinch a share of their 12th straight conference title. What separates Kansas from the rest of the Big 12 almost every year is their depth. The Jayhawks have the benefit of being able to match up with virtually any team that they face. If Kansas faces a team that features a physical big man, they can match up with him by playing Landen Lucus, who appears to get more confident with every game. If they face a smaller, faster lineup, they can match up with guys like Jamari Traylor, Cheick Diallo, or Carlton Bragg. There was even a moment in the game this past weekend where Self went with a 4-guard lineup. He played Graham, Mason, Selden, and Greene at the same time, which stretched the floor and gave the Jayhawks an offensive boost. Bill Self claims that he asked former Iowa State and current Chicago Bulls coach, Fred Hoiberg, for some advice earlier last week on how to use a 4-guard lineup.

The next week for the Jayhawks will be the most important week until March Madness. Kansas has lost their last two games in Manhattan against the Wildcats, and Kansas State will be playing for their NCAA tournament lives. A win against Kansas would be massive for Kansas States’ resume. If the Jayhawks can take care of the Wildcats, they will still have to travel to Waco and beat a top 25 Baylor team on the road. If they can handle those two road games, they will be in a great position to at least win a share of another Big 12 title. As of now, Kansas can still say that the road to a Big 12 title goes through Lawrence, which is a place where Kansas is nearly unbeatable.