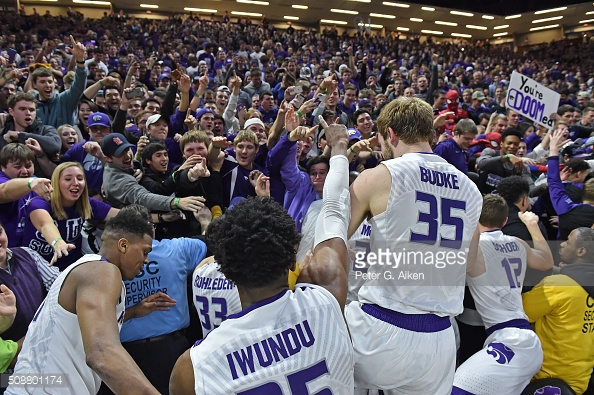 Let’s talk about both of the Wildcat basketball teams for a minute, and the problem they have in common. If you’re wondering what problem the teams could possibly share, it’s easy, it’s their fan base.

The Wildcat fan base showed their true colors on Monday night when the men hosted Texas. Just 48 hours after losing to that team down the road, The Octagon of Doom was more like the circle of silence.

Let’s skip all the nonsense about where this team is going, and where they should be by now. Let’s talk about the number of Jayhawk fans that were sitting in our seats, rooting for their team. Where did these people get their tickets? Why were our fans so eager to sell their tickets to them? Our rivalry game is not an opportunity for you to make money, it’s the time when you should want to be in your seat the most, cheering the loudest, supporting your team and making things as hard as possible on the opponents. On Monday night, the student section was barely over half full, and the rest of the sections were not any better. So where were the fans?

Cambridge Dictionary defines a ‘fan’ as a person who is very much ​interested in and ​spends a lot of ​time ​watching or ​reading about an ​entertainer or ​sports ​team. Explain to me how a city with a population of 56,078, along with the surrounding communities, can’t get 12,528 fans in their seats other than one game a year? The only explanation is that our fan base is absent except for when we’re on top of the mountain.

Yes, the men’s basketball team has not lived up to what everyone hoped they could be this year. But does anyone seriously think that they are more disappointed in the team than the team is in itself for what has happened this year? The disappointment is obvious on their faces every time they lose and don’t get the win for their fans. But how bad should they really feel, if at every stop, we have more fans jumping off the bandwagon? We all need to remember that we are there to support the student athletes, cheering for the names on the front and back of the jersey. Kansas State is not a perennial basketball powerhouse school, but they are our team and we need to act like their fans.

Also, how about our women’s basketball team? How many people even know that they are on the brink of an NCAA bid? After their win in Ames on Wednesday night, their first win in Hilton Coliseum in eight years, the team sits at 18-9 overall, and 8-8 in the Big 12. The job that Jeff Mittie has done in just his second year should be a source of great pride for Wildcat nation. This team is poised to make a run into the NCAA tournament for the first time since the 2011-2012 season.

How many of you have been to a women’s game this year? Despite the small crowds that are generally there, that team plays their butts off every game. The lady Wildcats will host fourth ranked Baylor on Saturday afternoon at 3:30 for Senior Day in Bramlage Coliseum. I urge everyone to get out there and cheer on this team because they deserve our support.

There are always plenty of fans willing to share their opinion when the times are tough about what needs to be changed. Now, let’s show our student athletes that we are better than that and get behind them for the rest of this season, because both teams still have a lot to play for. EMAW!