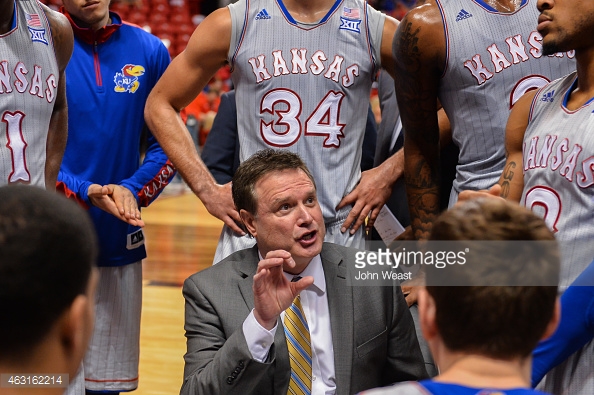 The Jayhawks tallied yet another impressive Big 12 win on Tuesday night, beating Baylor 66-60 in a hard fought battle in Waco. With this win KU improved to 12-3 in the Big 12 and 24-4 overall, which is good for a full 2 game lead over the next closest teams in the Big 12 standings (WVU and OU). With only 3 games remaining on the regular season schedule, KU can clinch at least a share of the Big 12 title on Saturday with a win against Texas Tech in Allen Fieldhouse.

The Red Raiders come into Saturday on a 5 game winning streak (3 of the 5 against ranked teams) and looking to continue to make a push towards March Madness. Even though Texas Tech has been much improved over the last few weeks a win in Allen Fieldhouse against Kansas is simply not something that comes easily. Look for the Jayhawks to come out fired up on Saturday with the intentions of winning yet another consecutive Big 12 championship.

Bill Self has made a habit out of winning Big 12 Championships at Kansas. This is not a secret to anyone as KU seeks its’ 12th consecutive conference title this year and once again shines as an example of continuous success in college basketball year in and year out. In a streak as unbelievable as this one there are bound to be a lot ridiculous stats that help to show just how dominant a team has been. None of these stats are more telling than the fact that Bill Self has suffered less home court losses (9) than he has won consecutive Big 12 championships. In today’s modern era of college basketball, what Self and the Jayhawks are doing is incredibly rare. Factors such as the increasingly popular 1-and-done strategy for college players as well as more relaxed transferring rules make continued success and longevity at college programs hard to come by, but even with these factors in the equation Self has continually prepared and reloaded his Jayhawk rosters to keep winning at incredible rates.

Something that Self has really excelled in while at KU is the ability to recruit both highly touted blue chip prospects as well as more developmental players. There is no better example of this than the roster breakdown of this years Jayhawk team. Self was able to recruit big time names like Cheick Diallo and Carlton Bragg onto a team that already had veteran leadership in place in the form of Perry Ellis, Devonte Graham, Wayne Selden Jr., and Frank Mason. Players like Graham and Mason may not have had as much talent as other high school players coming out in their same class, but they are both certainly talented enough to develop into great 4 year players at Kansas. This is an area that other coaches of blue blood programs have struggled with. Most blue blood head coaches are able to acquire talent relatively easily, but once that talent actually arrives many coaches have trouble keeping their players from leaving for the pro’s or staying happily because they depend on high end talent too much. An example of this is the recruiting system that Kentucky and John Calipari run. Although Kentucky usually has one of the top recruiting classes in the nation, they also have an incredibly high turnover rate from players leaving, which leads to an extreme dependence on freshmen and young talent every single year.

When there is so much turnover and unfamiliarity on a roster, it becomes hard to count mainly on freshmen to continually win. This is why Self has been able to string together such a long streak of consecutive conference titles, because where at most blue blood schools the roster would be reloaded with freshman, Kansas has experienced players to take over while the freshmen develop.

One of Kansas State’s problems: You, the fans.
Where will Baylor WR Corey Coleman go in NFL Draft?
To Top