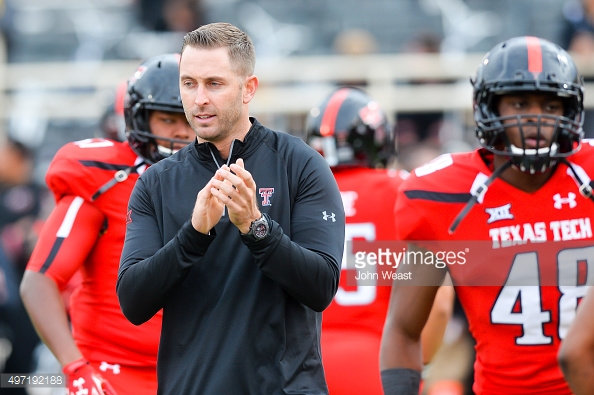 The first Wednesday of February is a day most Red Raider fans sit on the end of their seats waiting for drama to unfold as high school recruits fax in their letters of intent making their college commitments official. However, this year’s signing day passed with no big surprises. Most of the 2016 recruiting class was locked up by mid-November, so the biggest objective for Coach Kingsbury and his staff was hanging onto the current commits. They accomplished their goal as Tech lost no commits on signing day.

While this class may not be a top 20 class according to the rating services, this is the strongest class the Red Raiders have signed in quite a while. First of all, this class addresses the defensive line depth issues. The Red Raiders return only 4 defensive linemen who saw game action in 2015. The Red Raiders signed seven defensive linemen, six of which are from the high school ranks. That is the largest haul of high school defensive linemen I can remember the Red Raiders taking in one recruiting class. Secondly I like this class because it has playmakers. Jett Duffey (QB), Da’Leon Ward (RB), TJ Vasher (WR) and Derrick Willies (WR) are all impressive athletes that should significantly impact the Red Raider offense in the coming years. Lastly (and maybe most importantly), I like this class is there are no reaches. There are no academic question marks with this class. It can be frustrating to see a top-rated recruit with so much talent never make it to campus because of grades. There are also no athletic reaches. I see every player in the 2016 class providing an impact either as a starter or at least quality depth.

Here are some highlights from the 2016 class:

Coach Kingsbury has talked at length about getting bigger and better at outside receiver. Willies is just what the doctor ordered at 6’4, 210 pounds. I would be disappointed if he didn’t have a starting spot locked up by the end spring practice.

TJ Vasher is the highest rated high school signee from the 2016 class according to Rivals. Similar to Willies, he provides much needed size at the outside receiver spot (6’5, 180 pounds). My guess is he will need a redshirt season to add some weight, but I expect big things from Vasher in a couple of years.

The Red Raiders had to fight to hang onto Brooks as several schools were trying to pry him away from the Red Raiders at the last moment. Brooks is built like a starting Big 12 linebacker coming out of high school at 6’1, 232 pounds and should provide some instant depth. I have a feeling by the time his junior and senior years roll around, offensives will be scheming to find ways to avoid him.

At 6’7, 305 pounds Zach Adams is a tower of young man. He will be put at one of the tackle spots at that size. With a collegiate strength and conditioning program, Adams will add plenty of good weight and provide quality depth at the OL position as a redshirt freshman in 2017. He is explosive off the line and drives defensive players back until the whistle blows. This is a prototypical Lee Hayes (OL coach) offensive lineman.

Under The Radar: Houston Miller, DE

He reminds me of a bigger version of Daniel Howard, the ex-Red Raider LB/DE. He is a high motor guy who knows wreaks havoc on offenses. His senior year he had 15 QB hurries, 9 sacks and 16 tackles for loss.

The Red Raiders have started the 2017 very strong. The Red Raiders have received verbal commitments from 5 players so far. Jack Anderson (OL) is ranked in the top 200 players nationally in the 2017 class according to Rivals and the star of this class so far. Tyler Castaneda and Dawson Deaton are two more offensive lineman who have given their pledge to the Red Raiders. Add to those, Jalen Reagor, son of former Tech standout Monte Reagor, verbally committed to the Red Raiders in December. He is a 6’1 WR out of Waxahachie. He is the 40th ranked player in Texas. Lastly Xavier Martin out of Cibolo, TX is the QB Coach Kingsbury has hand selected for the 2017 class. The way this class has started, it has all the makings of a Top 25 class when all is said and done.

One of Kansas State’s problems: You, the fans.
Where will Baylor WR Corey Coleman go in NFL Draft?
To Top