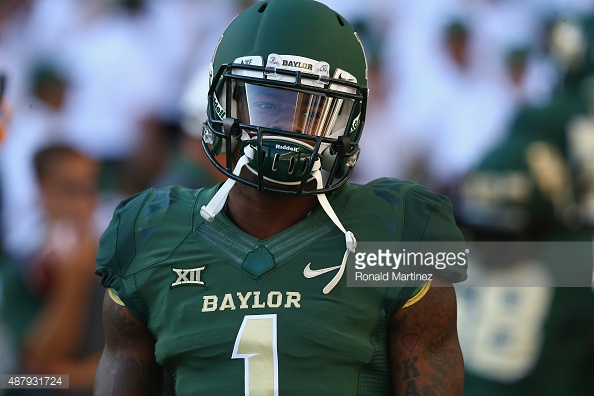 Art Briles will truly miss Corey Coleman. The electric wide receiver turned many heads in the Big 12 and country as he racked up some serious numbers in Baylor’s wide open spread offense. Women lie, men lie, but numbers don’t. Coleman took home the 2015 Biletnikoff Award as he caught 74 balls for 1,363 yards and 20 touchdowns.

As expected, Coleman decided to leave Baylor after his redshirt junior year. Many project him to be a first round pick. The knock on him is his size as he is only 5’10” and 190 pounds. So at the next level, where does he play? In the slot? Or on the outside?

Coleman is versatile and can play either position. While playing the slot, he averaged 4.06 yards per route and 3.97 yards per route on the outside only trailing TCU’s Josh Doctson. Many are comparing Coleman to Steve Smith in the NFL. However, he possesses the speed and quick burst to make defenders miss. Despite being only around 190 pounds, he is very physical and can fight off being jammed in press coverage.

Another question mark about Coleman is his catching ability. In 2015, he dropped 10 of 84 catchable passes and seven of 71 in 2014. He needs to work on his hands in order for him to be a true number one receiver in the NFL.

Many 2016 NFL draft rankings have Treadwell ranked higher than Coleman. Treadwell is bigger at 6’2”210 pounds and some could argue that he played in a better conference in the SEC. Stat wise, he caught more balls than Coleman but less yards and touchdowns. Baylor’s offense thrives on mismatches and getting the balls quickly to its athletes. Clearly the Bears had many more weapons on offense than Ole Miss, so what Coleman was able to do this past season is quite remarkable.

Treadwell appears to be the better pass catcher, but Coleman holds the edge in route running and getting out of the break quicker. A lot of factors will go into who will be the best receiver in 2016. Team, quarterback, and offensive scheme, will all need to be considered. It’s likely that Treadwell will come off the board first. He could go as high as third to the San Diego Chargers or 16th to the Detroit Lions to replace the retired Calvin Johnson.

As for combine numbers, just two months after having sports hernia surgery, Coleman had a 40.5’’ vertical jump, 129’’ broad jump, and 17 reps on the bench press. All these numbers were better than Treadwell’s. As for the fan-favorite, but often overrated, 40-yard dash, neither player ran it.

So what about Coleman?

Many project Coleman to be drafted 24th by the Cincinnati Bengals. The Bengals will have many holes to fill at wide receiver as they could potentially lose Marvin Jones and Mohamed Sanu via free agency. A.J. Green will need somebody opposite from him and Coleman would be the perfect fit. Playing with another Big 12 stud in Andy Dalton, Coleman should thrive going against the opposing team’s number two or three corner. Expect an Amari Cooper type season from Coleman as a rookie if he falls into the Bengals lap.

Texas Tech continues success on recruiting trail
How has downturn in oil and gas industry affected Big 12 Universities?
To Top