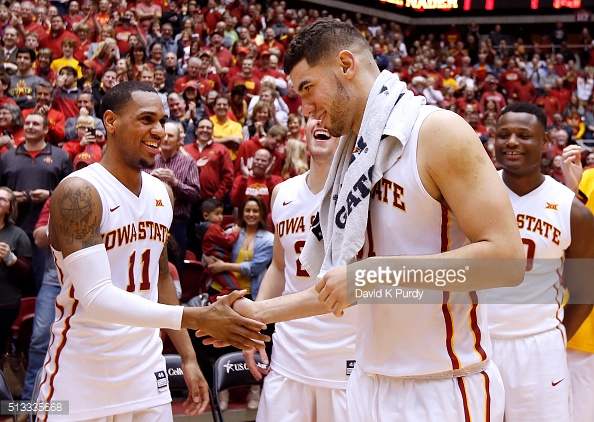 With one game left in the Cyclones ’15-’16 regular season everything hinges on their final conference game.  Win this game against Kansas and I believe Georges Niang and the gang will provide us with a season for the ages!  Lose this game, and this season will be riddled with more disdain than any other in our history.

The good news, it’s vs. KU!  Iowa State own KU, having won 4 of the last 5 against them.  The bad news, it’s vs. KU, at the Phog and this year’s Jayhawk team just wrapped up their 12th straight Big 12 conference championships.  Plus, avenging an early season loss to the Cyclones is all they care about.  Believe it or not, we are their biggest rivals.  If you’ve ever attended a Big 8 or Big 12 tourney, you’d understand.

So, since the season is riding on this game and since there is seemingly no chance in hell Iowa State will win, then why even show up?  Why is coach Prohm even bringing his team to Lawrence after humiliating the Jayhawks in Ames with a brilliant second half?  Why?  It’s simple: because Iowa State is going to win.

The entire year has been frustrating, streak-less, unpredictable, unexplainable, wrought with WTF moments, lacking any consistency whatsoever, questioned by every fan and critic and it’s begging for another twist…a twist perfectly suited for an evening in Lawrence.

In a season where Iowa State beat Iowa then lost to UNI; where ISU beat KU and OU in Hilton, then lost to BU and WVU IN HILTON; where the Cyclones lost our heart and soul in Naz then find a gunslinger in the IceMan; where Prohm is forced to suspend our  best defender and rebounder only to ignite Darth Nader…this game can only go one way.  The Cyclones are going to blow out KU in Allen Fieldhouse.  It just makes sense.

But, lose this game and nothing else will matter.  Win the Big 12 tourney you say?  Great! (sarcasm). Let’s do that again then proceed lose to KU alum coached UAB in round 1.  That game still stings!

Fred or no Fred, we all felt this was a Final Four team, and you’ll have a hard time convincing me you thought otherwise.

I still believe they are, regardless of all that this year has been. I still believe this team can make an unprecedented run in March, and I know a lot of other fans that still believe too.  Difference is, they don’t care if we lose this game or not.  They’re expecting Hilton South to bring our team back to their winning ways.  Old me can’t blame them.  It’s in KC, our fan base will be 10,000 strong and we magically believe that this team will respond.

But, the new me has seen the light, there is no Hilton Magic in this year’s squad.  If there were, we would have found a way to beat Baylor and the Mountaineers IN HILTON.  This team needs something different, they need the toughness that winning in Lawrence takes and if they can’t do it tomorrow…prepare for my twitter feed to unload because this season is toast!

And while winning in the Big 12 tourney is fun, hell it is exhilarating, it clearly doesn’t mean anything come March Madness.  What has mattered to our 5 teams that have made 4 sweet 16’s and 1 elite 8 is that we’ve had a team that has proven they can beat top teams on the road, and unless we win in Lawrence on Saturday, this team will not have done that all year.

Good luck boys, you’re going to need it. You’ll need the refs on your side, hot shooting, solid defense, rebounding margin, cold shooting from Kansas and multiple technical’s out of Self.  Win, and look out CBB, there’s a Cyclone brewing.  Lose and all we have is a hope for a run in KC and a whimper in March.  I’m not down with the latter!  I want more and I want this team to prove it to me against our most hated rival and in the final home game for their 98 year old, 34th year senior Perry Ellis.

How has downturn in oil and gas industry affected Big 12 Universities?
Big 12 hoops is ready to showcase stuff on national stage
To Top