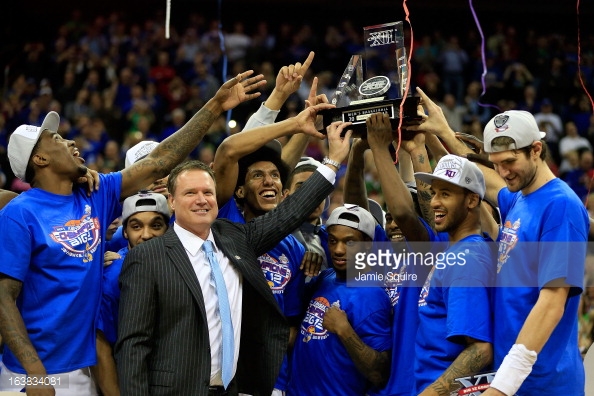 Just like this season, in 2015, the conference was very strong. Most analysts agreed that the Big 12 was the best conference heading into March Madness, as it had seven teams in the big dance, just like it will have seven teams getting a bid for this years’ NCAA tournament. After all the hype, the Big 12 choked and proved to be the pretenders of the tournament. Only two of the seven teams that had bids even made it to the Sweet Sixteen round, and that was as far as any Big 12 team went last year.

In looking at the past, the Big 12 letdowns in March have become way too common. Unless you want to count West Virginia (which was not a member of the Big 12 in 2010), the last Big 12 team not named Kansas to make a Final Four run was Oklahoma State in 2004. Even Kansas has had several disappointing seasons in the tournament lately, losing in the first weekend in each of the past two seasons to much lower seeded opponents. This is supposed to be one of the premier basketball conferences in America, and these kinds of facts about what the conference has done on the biggest stage is embarrassing.

While the past has been rough, this season has a different feel for the Big 12. The conference features numerous teams that have a combination of talent and experience that will be a difficult matchup for any team to face at this time of year. One team that did what it was supposed to do in last year’s tournament was West Virginia. The Mountaineers went to the Sweet Sixteen where they faced the most talented team in the tournament, Kentucky, and proved to be a tough matchup while falling to the Wildcats. I expect for Bob Huggins to have his team ready to play this year, as the press that they use is a difficult style of play for any team, especially without much time to prepare for it.

Oklahoma should be another team that will be a very difficult matchup for any opponent at this time of year. Buddy Hield has a case to be the National Player of the Year, and the Sooners have a great deal of experience and talent that could play a huge factor in making a deep tournament run this March. Similar to the Sooners, Iowa State does not have a great amount of depth on this years’ team, but they also have the kind of players that can lead a team to a deep run in this tournament. If Morris can stay healthy down the stretch, the Cyclones will be in good shape. Niang is one of the elite scorers in basketball and Iowa State has a variety of solid role players, including Nader, Thomas, Burton, and McKay, which can contribute to the team and make the Cyclones a real threat to be a Final Four team. Even in Waco, the Baylor Bears have guys like Rico Gathers and Taurean Prince that could lead Scott Drew’s team on a big run.

The possible number one overall seed in the tournament could come from the Big 12, and that team is of course, Bill Self’s Jayhawks. After winning eleven straight conference games, the Jayhawks have solidified themselves as one of the best teams in the nation. Just like the rest of the contenders in the Big 12, the Jayhawks have a rare combination of veteran talent and leadership that will put them in good shape for the most grueling tournament of the year. Kansas is far from a perfect team, though. They need guys like Lucus and Graham to continue their solid play in order for the Jayhawks to have a chance to make a serious run.

This is the most exciting time of the year for any college basketball fan. However, if you are a fan of the Big 12, you can’t help but be nervous at this time. The conference cannot continue the trend of being dominant during the regular season and choking in March. This season must be different. Even some of the potentially lower seeded teams, such as Texas and Texas Tech have the kind of talent and coaching that could lead to a serious run in this year’s tournament. The Big 12 is simply too good to choke this year. Big 12 fans should expect to see at least one Final Four team, as well as many other teams in the conference that make deep runs this March.

Iowa State’s finale vs. Kansas to determine March Madness fate
Why the Mountaineers can win it all this March
To Top