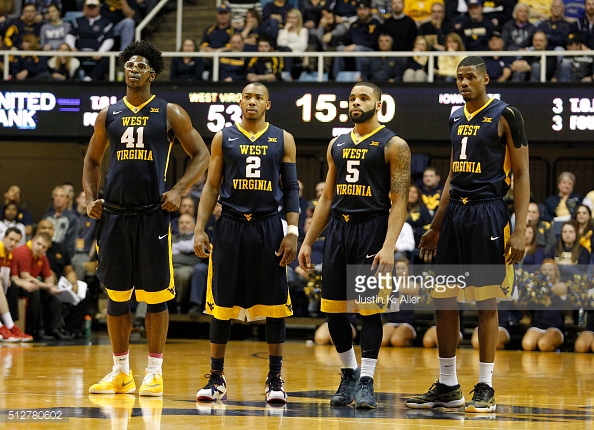 Now that the regular season is finally in the rear view mirror. The Mountaineers can prepare for what should be a very unpredictable postseason. WVU is one of the greatest examples of this unpredictable year, as a team with very little top tier talent that has managed to consistently be a top team in the polls. So what does a team like that do when it comes to the Big 12 tournament and then the NCAA tournament? Let’s look into that.

WVU has a good run going of four wins in a row including wins over ranked teams Iowa State and Baylor. All those wins were also by double digits. This is a great sign heading into the Big 12 tournament. Their first matchup will be against TCU. The Horned Frogs upset a surprisingly sluggish Texas Tech team last night in the first round. As for WVU’s two match ups this year against TCU, the Mountaineers pulled out an 8-point road win early in the season, before smoking the Horned Frogs by 31 at home. As for tonight, I’m guessing that margin of victory falls somewhere between those two numbers.

However it’s the rest of the tournament that concerns me. The next game would probably be against Oklahoma and then for predictions’ sake they would face Kansas in the championship. This is the part that concerns me. Oklahoma has already defeated WVU twice and Kansas has won eleven in a row. There is no doubt that WVU can play with these teams, but considering it’s practically home for both those teams, it is hard to see WVU coming out of this with two wins. Not to mention, Oklahoma and Kansas know the press very well and will not be surprised by it. I could see one win but beating that much talent back to back in a hostile environment is not something I am going to predict.

Then comes the NCAA tournament. Last year, WVU came in with the same defense that they possess this year. They started out with success, getting to the Sweet Sixteen. Then they were infamously destroyed by one of the greatest teams in the history of college basketball in Kentucky. Obviously, there is no team in this year’s tourney that is nearly as good as Kentucky was last year. However, Press Virginia was very exposed in that loss. Press Virginia thrives on taking teams out of their rhythm and even when WVU loses, the goal of the other team losing their rhythm is typically still achieved. That game was a far different story.

But, this year, this team does have a legitimate shot to win it all. It is a very open field and even though I believe West Virginia does have a very low dose of talent, there are no teams in college basketball that are even comparable to last year’s Kentucky team. Plus WVU will face teams that have never seen Press Virginia before. There is no one they can’t play with. No other team in college basketball is harder to prepare for. That is an absolute. You can’t simulate what Press Virginia does. Kentucky was able to do it last year because their talent and chemistry was grossly superior, plus Press Virginia was far less polished. Again there is no team in this field like that Wildcat’s team in fact there isn’t a Wisconsin or Duke of last year either.

Now, if WVU has very poor shooting numbers or low turnover numbers, or no offensive rebounds. They will still lose. But if they keep those numbers on the positive, it could be one very special year to be a Mountaineer.