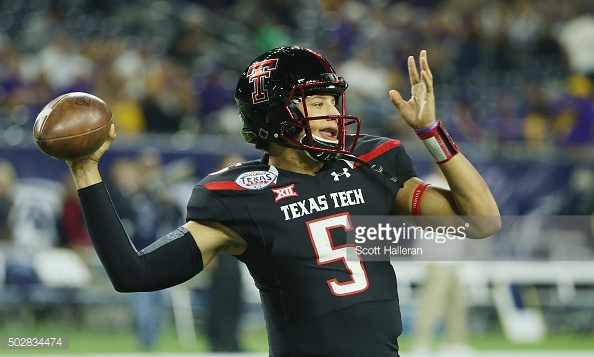 Ah, spring football! That exciting oasis amidst that football dessert we call the offseason. Although Coach Kingsbury keeps the media pretty much locked out of spring football (with the exception of the spring game), it still gives fans an opportunity to talk football and build excitement for the upcoming season. The spring football game in particular has become a big topic of discussion on Red Raider message boards now that their spring game is televised annually.

Like every college football team, the Red Raiders have their share of question marks going into spring football. In fact, I think each position group has at least one burning question that needs answering this spring. I have ranked the question of each position group in order of its importance from my point-of-view.

#1) Defensive Line – Who plays besides Fehoko?

Why #1: I am a believer in the old adage that football is won in the trenches. Last year, Tech’s rush defense was one of the worst in the nation. It is in need of dramatic improvements.

Bad News: Last year’s defensive line had very few bright spots. If that isn’t bad enough, very few of those guys return. Sophomore Breinden Fehoko is the only returner who played consistently in every game last season. He will be the anchor of the 2016 DL. Outside of him, the Red Raiders will be scrambling to find both starters and more importantly depth.

Verdict: I don’t expect much improvement in this group in 2016. The difference is that there will be more bodies this season. Last season, there were several games in which the defense started strong but got worn down and ultimately couldn’t come up with enough stops. This year the bigger storyline for their struggles will be experience, not depth. Having said that, watch out in 2017, because this group could be salty.

Why #2: Some may disagree that this position deserves to be ranked the second most important question, but I think replacing a back-to-back 1,000 yard rusher is not going to be easy. Not only are you replacing the numbers, but DeAndre Washington and QB Pat Mahomes were the only skill players who produced consistently last season. The rest of the skill players had a good game here or there, but disappeared too often.

Bad News: DeAndre is gone and Justin Stockton is the only RB who saw significant snaps last season. Reports are that Stockton has bulked up this spring, but he has looked more like a change of pace back than an every down back up to this point in his collegiate career.

Good News: There are plenty of options. Junior Justin Stockton, sophomore Demarcus Felton and redshirt freshman Corey Dauphine are the frontrunners to replace DeAndre Washington. Between these three guys Coach Kingsbury should be able to find one or two of them who can help ease the burden of Washington’s loss.

Verdict: I expect to see a drop off in 2016 at the RB position. It isn’t that there isn’t talent at the position, but they need a year of seasoning. I wouldn’t be surprised to see RB by committee to start the season before settling on the hot hand when conference play rolls around. If I had to guess, Corey Dauphine ends up as the lead back. He has the combination of size and speed to be an every down back.

Why #3: Back to my “football is won in the trenches” adage, the Red Raiders will need to replace three starters from a strong, but not dominating, offensive line. Le’Raven Clark, Jared Kaster and Alfredo Morales depart after finishing their eligibility. A surefire NFL draft pick and 4-year starter for the Red Raiders, Clark leaves the biggest shoes to fill.

Bad News: 60% of the Red Raider line graduated after the season and each of the three were multiple year starters. This means a lot of fresh faces lacking experience.

Verdict: There may be some growing pains early in the season, but I expect another strong offensive line if the coaches can find a solid replacement for Clark. Offense line coach Lee Hayes is arguably the best position coach the Red Raiders have. He will get the best five linemen on the field and that should be enough to have a strong offensive line again in 2016.

#4) Wide Receivers: Do the Red Raiders have any playmakers at receiver?

Why #4: I think position groups four through six in my rankings are pretty interchangeable. I rank WRs #4 due to Coach Kingsbury’s constant harping about getting better at the wide receiver position last season.

Bad News: The cupboard is almost bare as far as returning players. The only mildly consistent receiver last season, Jakeem Grant, has graduated. He had plenty of great plays, but some really costly drops as well. The other three starters from the start of the 2015 season were all disappointing in their own way. Ian Sadler looked ready to breakout in 2015 after a strong true freshman season in 2014 but fought injuries and inconsistency last season. Devin Lauderdale had a few good games early in the season before going MIA while Reginald Davis didn’t fare any better.

Good News: There are some young guys who got experience last season. Tony Brown, Keke Coutee and Jonathan Giles played as true freshman. Redshirt freshmen, Quan Shorts and Donta Thompson could see significant playing time this season. The headliner of the 2016 recruiting class, Derrick Willies, provides size at the outside WR position as well as D1 experience from his year spent at the University of Iowa. Outside of those guys, Dylan Cantrell returns from an injury after missing the 2015 season. This time last year the some Red Raider coaches thought he had the best spring of any WR.

Verdict: I predict we hear the same thing out of Coach Kingsbury this season in regards to receiver play. Willies looks the part, but outside of him I have a hard time seeing any other receivers stepping up and impacting the position in a significant way. I hope I am wrong.

#5) Defensive Back: Who plays opposite Nigel Bethel and Jah’Shawn Johnson?

Why #5: The Red Raiders were unable to find the right mix of DBs last season despite playing a bunch of different combinations.

Bad News: The two players who got most of the snaps opposite of Bethel and Johnson were Keenon Ward at safety and Justis Nelson at cornerback. Neither have shown improvement from their freshman year, so as seniors in 2016 I wouldn’t expect that to change. If they are still starting in 2016, I would expect the same results which weren’t all that great. The reality is there are not a lot of options outside of those of two guys which is even more reason for concern.

Good News: Bethel and Johnson should improve on their solid 2015 seasons after another offseason. If that’s the case, the Red Raiders need only to find two to three more guys to have a solid secondary. There are a couple of guys who I expect to push Ward and Nelson for their spots. DJ Polite-Bray looked solid last spring at cornerback before an injury derailed his 2015 season before it started. Redshirt sophomore Payton Hendrix has received praise from coaches consistently enough to make me think he could push to be a starter.

Verdict: I may be wrong, but I expect Polite-Bray to be a nice surprise for Red Raider fans in 2016. He is big and physical which is what DC David Gibbs wants in this cornerbacks. I am less optimistic about safety. I think we see a slight improvement in this group based on experience alone.

#6) Linebacker: Will the youth movement lead to success?

Why #6: This group was a pleasant surprise in 2015 because two freshman spearheaded the group towards the end of the season.

Bad News: This group is also hurting due to a lack of quality depth. Quite a few players made appearances at the LB position but only two returning players made an impact, Dakota Allen and D’Vonta Hinton. Hinton played solidly as a true freshman. His only issue seems to be injury concern. There were several times the trainers visited him on the field as he lay in a heap. Outside of these two guys, former safety Jamile Johnson, true freshman Jordyn Brooks and Notre Dame transfer Kolin Hill seem to be the only newcomers with a chance to make an impact in 2016.

Good News: When Allen and Hinton were on the field together, the LB corps played its best ball of the season. Jordyn Brooks is already built more like a senior LB than a true freshman at 6’1’’, 232 pounds. Coaches have said they expect him to play in 2016. Jamile Johnson turned down an offer from the University of Texas to come to Tech. Big things are expected from him even though he is switching to LB after being recruited as a safety.

Verdict: With Hinton and Allen playing, I would again expect things to improve at LB. I feel more optimistic that the coaches can put together four LBs who can play. The biggest issue for this position group (as with many I have listed) is depth. I think if you get beyond the starters, there will be a significant drop off in play.

#7) – Quarterback – What happens if Mahomes gets injured?

Why #7: Pat Mahomes, not much else to say. No shocker that this is the least of the Red Raiders spring worries. Mahomes put up huge numbers last year as a sophomore and all signs point to him doing it again as a junior.

Bad News: The bad news is that Davis Webb, a very capable quarterback, transferred to Colorado leaving the Red Raiders thin at backup. Iowa transfer Nik Shimonek will be the only backup outside of true freshman Jett Duffey whom the coaching staff would like to redshirt if possible. An injury to Mahomes and things get interesting at the QB for the Red Raiders.

Verdict: I am ready to see Mahomes out on the field again leading the Red Raiders. I hope he stays injury free in 2016. If so, I see the Red Raiders going bowling again.

Overall, I think the Red Raiders are building towards 2017. There is too much youth and too little depth in key positions for the Red Raiders to make big strides (i.e.. 9 or 10 regular season wins). However, 2016 will give a lot of young guys the opportunity to go through growing pains which will benefit the team a year from now.

Why the Mountaineers can win it all this March
How far will West Virginia go in the NCAA Tournament?
To Top