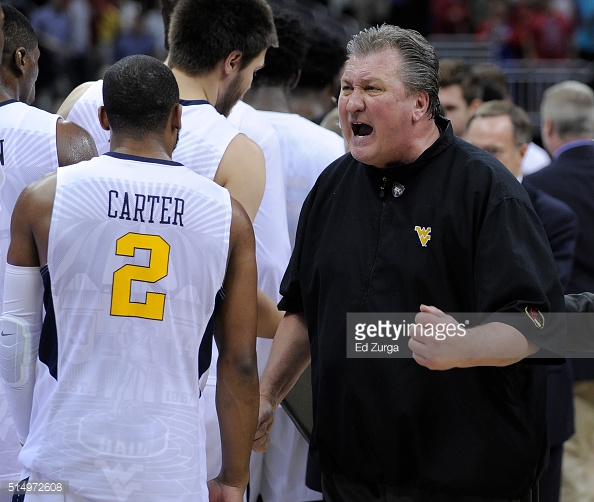 After beating a tough TCU team, then surviving on an almost-buzzer-beating-half-court-heave from Oklahoma’s Buddy Hield, the Mountaineers fell to the Kansas Jayhawks in the Big 12 title game.

The Horned Frogs from TCU were just a minor speed bump for the ‘Eers, winning their first Big 12 tournament game since joining the conference in 2012. WVU, or “Press Virginia” as many have referred to them, never trailed in the game and made 11 3’s, winning the game by 20.

Against Oklahoma, WVU imagined they would have their hands full with Sooner’s senior Buddy Hield (2nd in nation in scoring – 25pts/gm). Sophomore Dax Miles, Jr. drew the assignment early versus Hield, and did a great job, holding him to 2 first half points (both FTs). In the second half, everyone was just waiting for Hield to get loose. He (finally) saw a 3 pointer go through the hoop with about 9 minutes left in the game. Press Virginia held Hield to a season low 6 points, just some 24 hours after he hung 39 points on Iowa State.

The ‘Eers were just doing what they had planned.

Coming in to the title game against Kansas, not many outsiders were giving WVU a real chance to win. Devin Williams, WVU’s terror in the paint, led the way with a career high 31 points and 10 rebounds. This was a great effort, but ultimately not enough. The Jayhawks prevailed and knocked off the Mountaineers, ending their run at a Big 12 Championship. Regardless….it’s still time to dance!

West Virginia received the number 3 seed in the East region from the NCAA selection committee on Selection Sunday. This was a bit disappointing for Mountaineer fans, especially after seeing Oklahoma, the team WVU beat to reach the Big 12 title, grab a 2 seed (in what appears to be an easier region). Instead, WVU is in the same region as blue-blood programs North Carolina, Kentucky, and Indiana. Those are 3 of the best college basketball programs the NCAA has to offer, not to mention the 2 seed Xavier, last year’s runner up Wisconsin, and a possible Sweet Sixteen matchup with, wait for it….PITT! Don’t let the lyrics to Neil Diamond’s “Sweet Caroline” ring out just yet (go ahead & hum it, though).

The Mountaineers first round matchup is with little known Stephen F. Austin. The Lumberjacks, as they are called, aren’t your normal 14 seed, though: they are entering the big dance on a 20 game winning streak. Twenty games! The Mountaineers surely know this, and most likely don’t care, and that’s the exact mindset a team that plays this way needs in order to succeed. WVU averages the most steals in the nation at 9.9 per game, not to mention the countless deflections and other turnovers they force.

Another thing that tilts in the ‘Eers favor is the scheduling of the games. Their game against Stephen F. Austin is on Friday. If WVU wins that game, they’ll play again on Sunday. This is not only important because of WVU’s depth (and the lack thereof for others’), but it gives their second opponent very little time to prepare for the vaunted press WVU executes. Most teams have trouble with the press when they have time to prepare; this short period between games is probably going to keep a few opponents awake at night. I, however, will be sleeping well, and dreaming of all the wonderful possibilities for the Mountaineers.