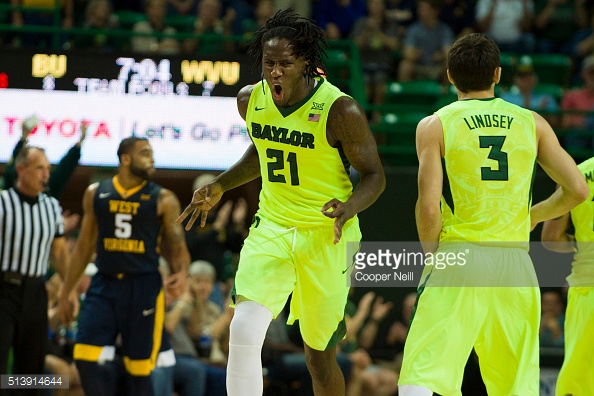 Does Baylor really have a shot at going the distance this year in the NCAA Tournament? Statistically, probably not. They’re a five seed. But then again, “statistically, probably not” goes for every team out there. In a 68 team tournament, consisting of 6 undefeated games for the winner, and flat out 0 perfect brackets made in the history of the tournament, so anything can happen. Sure, people pick the winners every year, but so what? Just drop down a one seed in the final box, or fill out multiple brackets, and you’ve got a decent shot. The point I’m making is that, as advertised, it’s madness.

So, as a Bear, it got me wondering: What would it look like for Baylor if they did go the distance? So,. I filled out my bracket as normal, but with Baylor winning every game they were in, and this is what I got.

Starting off the tournament with what appears to be an away game, Baylor faces Yale in Providence, RI. This is the only guaranteed game, and after what happened last year, it should be seen all the way through. Yale is a good team. They won their conference tournament and they are a top rebounding team (even against the good teams they’ve played). All in all, their stats are pretty comparable. The thing that stands out the most to me though, is that their percentages are the same, but their strength of schedules (SOS) are way different. As a Bear it might seem hypocritical to throw out the strength of schedule argument to favor us, but ESPN has Baylor’s ranked number 3, and Yale’s at 178. I think this is best highlighted in Yale’s PPG allowed; overall the number is 61, but against top 50 teams, it’s 75. I don’t see the game against Baylor resembling the former. Even with the commonalities of 5 v 12 upsets, and how surprisingly well the Ivy League schools have done in recent years, I think this one will go to Baylor.

Round of 32 would pit Baylor against Duke. In what will be my second favorite game of the tournament (the first being whichever game Kansas loses), the Bears will be looking for vengeance after that 2010 elite 8 matchup that got away from them, where the Blue Devils went on to become National Champions. But 2016 Duke is far different from that team. This is the most beatable Duke team I’ve seen in recent memory, and they dropped out of the top 25 this year for the first time in almost ten years. Their record and SOS is very comparable to Baylor’s so they have a pretty even history. What sticks out to me the most about Duke are these three things: 1: They don’t have a lot of depth. Late in the second game in three days, or if they get into foul trouble, this could be crucial. This could also translate to Grayson Allen putting the team on his back though, so we’ll see. 2: They give up more shots than they take. They average taking 59.8 shots per game, and give up 62, which is weird, and they’re one of the few top teams that do this. I think this happens because they rely heavily on the three, and if that’s not working for them, then that could spell trouble for Coach K and Co. Number 3: Baylor is better at rebounding. Baylor’s rebounding margin is +7.9 (15 in the nation), and Duke’s is -2.0 (199 in the nation). Duke can’t give up so many shots, if they aren’t going to get the rebounds. If there was ever a year for Baylor to kill off a powerhouse team, this is it. But I know that coach K won’t go down easily.

Is there a such thing as a weak one seed? If there is, I’d say Oregon is that team. To be honest, I haven’t seen a lot of Oregon basketball this year. Baylor played them in one of the first games of the season, and they almost came back to win it, but Oregon held on and that’s all I’ve physically watched of them. So I haven’t seen a lot, but what’s strange is that I can’t find a lot. I can look at their scores, against top 50 teams and see that they fare pretty well (10-3), but I only found them in the top 25, in one of the following categories: assist turnover ratio, defensive rebounds per game, fewest turnovers, field-goal percentage, offensive rebounds per game, rebound margin, scoring offense, scoring margin, three-point percentage, three’s per game, turnover margin (#25), and turnovers per game. That’s it. A one seed isn’t doing well in any of those categories. I just don’t see this Oregon squad winning three games, and I think they’ll fall to Baylor.

So those are the games that I really needed to look into and speculate on, because by my bracket, their next three games would be all Big 12 squads.

If Baylor can shut down Grayson Allen, and Brandon Ingram, then they should be able to close out Buddy Hield. I’m not incredibly convinced by OU’s depth, and the way West Virginia shut him down proved how vulnerable they can be. Other than that, all I can really say (hope for) is that beating a team three times is a really hard thing to do in sports. Baylor only lost by two the last time they met, so it’s not a crazy idea – just a weak one.

Baylor proved very tough for Kansas in the tournament, and the game was even pretty close in Waco a few weeks prior, before Kansas just ran away with it at the end. I think Kansas is the best team in the nation and will probably walk away with the trophy, but I’m a firm believer that stats go out the window between conference teams. This game would be in Houston, so maybe a lot of Wacoans could put some wind in their sails. Or maybe have Gathers shoot some more threes?

This is just the same as before. Baylor lost to West Virginia twice in the regular season, and I think everyone would welcome “the team that beat Kansas against the team that beat UNC and Michigan St”, I just don’t have any real grounds to pull for Baylor here. West Virginia would be way too hot, and I just don’t think anyone could stop them. Anything’s possible though, and in Scott Drew we trust.

If Baylor went all the way, this is essentially what it would look like. Three tough, but winnable games at the beginning, then prayers, luck and home court advantage to take the back three, which would definitely be madness.