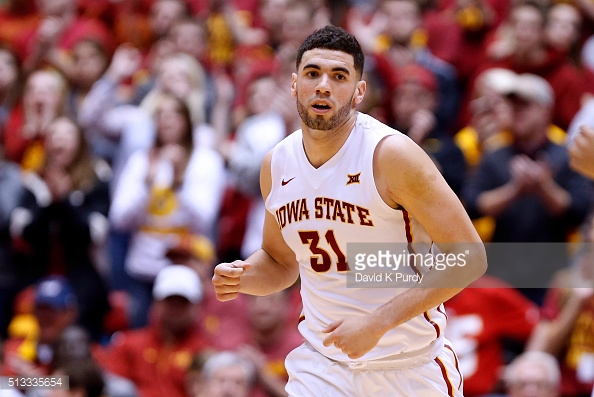 The Midwest’s 4th seeded Iowa State Cyclones (21-11) begin their Madness on TBS as they tip-off against the 13th seeded Iona Gaels (22-10) @ 2PM ET.  One of the keys for the ’clones is the health of their star junior point guard Monte Morris.  The Cousy Award finalist has been huge this season averaging 13.9 points, 6.9 assists and 4.1 rebounds a game for ISU.  Battling a shoulder injury since the regular season finale, Monte’s shooting has been greatly affected (1-9 vs. OU) not allowing him to take over games with his triple-threat ability.

This has led to senior Georges Niang taking the reigns and becoming the Cyclones lead facilitator on offense.  This 4 year player has done so much for the Cyclones both on and off the court.  His 26-point second half effort  in the Big 12 Tourney against Oklahoma was truly inspiring.  He totaled 31 points fouling out in the defeat, a fitting end to his Hilton South career.  As a top-10 scorer in team history, he is already a Cyclone legend.  The 2nd Team All-American will want to make the most of his last NCAA Tournament, cementing his status amongst Cyclone Greats.  His #31 will be retired in Hilton someday, Niang will finish as one of the winningest players to ever wear Cardinal and Gold.  He will certainly want to go out on top.

After being bounced in the 1st round vs UAB last year, the Cyclones look to regain NCAA confidence and avoid upset against the Iona.  The Gaels play a quick tempo offense so this one could turn into a high scoring affair.  Side note: A Gael is anyone of Irish-Gaelic descent, so probably not the best of luck to play them on St Patrick’s Day.  The MAAC Champion Gaels are led by a dynamic scorer in AJ English.  English, a senior, put up an impressive stat line 22.4 points, 6.2 assists, and 5 rebounds a game for the Gaels.  Look for the Cyclones to assign the task of slowing down English to junior guard Matt Thomas.  It won’t be easy, but it is something he’s used to doing.

The play of Jameel McKay as the Cyclones only real rim-protector and his ability to stay out of foul trouble could loom large.  McKay, last year’s Big 12 DPOY, has struggled with his consistency and has appeared lost at times. ISU also needs a solid performance from Abdul Nader and Matt Thomas, especially from behind the arc.  When those two are consistently knocking down 3’s the Cyclones are nearly unbeatable.  Another key will be Deonte Burton.  With an already depth-challenged bench look for Burton to bring the intensity on the glass as well as providing the Cyclones with an athletic scoring option.  A major contribution from two of the  three (Burton, Nader, Thomas) should be enough to get by their first round opponent.

Looking  forward to a potential 2nd round matchup with 5th seeded Purdue, the Boilermakers three 7-footers would give the Cyclones a huge problem on the glass.  Since nothing comes easy this time of year, they must take it one game at a time.  They must live in the moment and stay focused on both ends of the floor.  If ISU can hit the three and play just enough D they should be fine.  Monte’s health is also something to keep an eye on in the coming days and going forward.  If he can manage to get the ball to Georges & Co., the Cyclones should be able to survive and advance.  Watch out Denver, A Storm Is Coming.  March on Cyclone Nation.