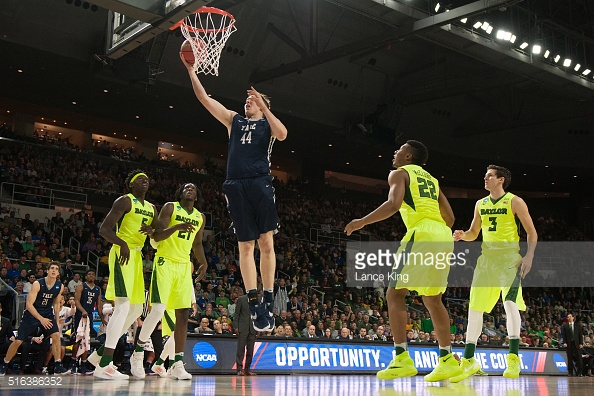 If I had to describe the Baylor’s game in one word, I think I would use emotional. It was an emotional rollercoaster for the fans, but it was the players that were showing way too much of it on the court. It was emotion that caused the Bears to consistently get caught up in the moment, and not execute when they need to. It proved to be a huge factor in the game as Yale seemed to be stone cold, emotionless robots out there. If I had one word for them, it would be effective. They found their plan and executed it well. Granted, a lot of that plan was let Makai Mason rain field goals with a career high 31 points, but Justin Sears scored 18 points of his own. Regardless of how well Yale played, this was Baylor’s game for the taking but they just couldn’t take it.

Prince played a very raw game. His emotions were all laid out for everyone to see. He was energetically running all over the court; he was very ecstatic with his dunk that resulted in a tech for pulling up his feet; his competitiveness came out in his squabble with Gathers on the sideline; and his frustrations bubbled over into the post game presser, where he gave a very literal answer to a reporter’s rebounding question.

As I was watching the game, Prince’s actions served almost as a mirror to my feelings in live time. I’m not faulting him for the loss, I just feel that his actions were most memorable, and far more encompassing of what everyone else was feeling.

We’ll start with the tech. Baylor started off the game pretty well. They lead for a majority of the opening 13 minutes, and then the momentum changed almost instantaneously. Yale started getting all the rebounds, and up to the aforementioned dunk, had been leading ever since they took it at the 7:06 mark. Baylor’s defense was a mess. Neither the zone, nor the man defenses that had been implemented were working, and the Bulldogs were taking full advantage. Most notable was Makai Mason who had 16 points at the half, and Yale as a whole shot almost 70% from the field. Yale was staying in this game and it was worrying for Bears fans everywhere (thanks a lot to the 5v12 reminders that came up seemingly every minute or so) and halftime couldn’t come fast enough. Prince got a dunk off a Lindsey steal, and a fire was lit. He slammed it, and I thought the backboard was going to break. You could just hear the entire city sigh in relief as Baylor had gotten their first huge play in a while, and see it on Prince’s face. Feeling this, Prince added a little extra flare to it and you could hear the campus erupt with elations of joy. Nobody cared about the tech because the Bears were now pumped. Just seconds later, Rico Gathers got the block of the tournament, and even though Baylor was down, it felt like a comeback was in the works. We had the wind at our back.

That wind carried into the locker room, because Baylor was rolling right from the start of the second half. Baylor opened on a 6-0 run to take the lead, and all was right with the world (our brackets) again. Sadly, that was the last time Baylor would be in front. After that, Prince went manic. He was this ball of energy just running all over the court erratically, with no structure trying to do everything himself. He, like us, had gotten a little carried away. In the span of 58 seconds, he took four shots, and missed them all. Gathers wasn’t too happy about it, and there was some yelling and shoving during a heated exchange at the ensuing TV timeout. The yelling was fine. It was nothing personal – just competitiveness of two players coming out in a high stakes match. I was frustrated at the time. I definitely felt for Prince because he was hustling all over the place, not getting fouls called for him, and no shots falling either (in fact he never went to the line the entire game). He couldn’t catch a break. Baylor couldn’t catch a break. With that being said, I under understood where Gathers was coming from probably calling Prince selfish (speculation), but the Bears needed to start being a team if they were going to win this. They needed to pull it together.

Prince came out for a little bit, the Bears never bounced back, and Yale built an unassailable lead.

As in traditional Baylor fashion, they went down fighting. Ish had a great steal that pulled Baylor within two with about a minute left, and I hoped they would escape, but you never felt they actually would. If there was a play that epitomized the game it was “the slip” by Medford. It was so symbolic, because no matter what was going on, no matter how atrocious Baylor’s defense was, no matter what percentage Yale was shooting, no matter how many points Makai Mason was netting, and no matter how many turnovers Yale had, (12 in total) Baylor was still in it every step of the way. It was theirs to win, or lose. Ultimately it ended up being the latter, because they just couldn’t capitalize.

As far as the press conference, I don’t read too much into it. I think he was upset, and when the reporter asked a question that wasn’t really a question and more so just pointing out the fact the Bears were outrebounded (after it had already been pointed out moments before), he lashed out a bit. It was nothing but frustration, which we all were feeling.

This is what March Madness is all about. One and done. If Baylor could have kept their emotions in check, it probably would have ended differently. Had this been a series, I would have put my money on Baylor even after this loss. The tournament doesn’t work that way, and so it can be cruel, or it can be charitable depending on your outcome. For Baylor it was cruel (maybe not as cruel as last year), but there are still many positives to takeaway – mainly the never say die attitude. Next year will be tough losing so many seniors, but maybe that’s just setting the stage to be on the upset side of a 12v5 matchup.