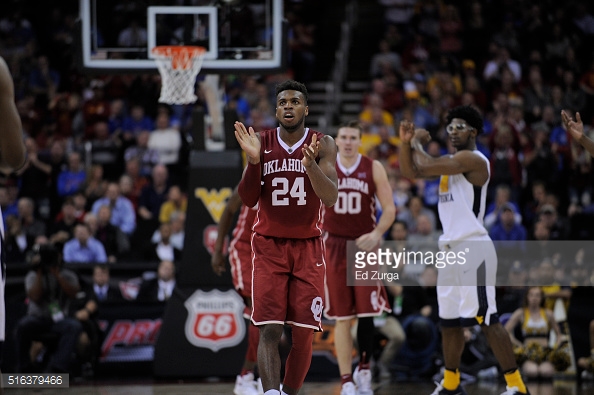 The Oklahoma Sooners won a close on over VCU yesterday 85-81 to clinch a trip to the Sweet 16 for the second year in a row yesterday. Buddy Hield led the way for the Sooners with 36 points, 29 of which came in the second half.
While it was easy to notice that the Sooners gave up a sizable lead in the second half, with VCU eventually even taking the lead. The Sooners and Hield deserve a lot of credit for responding every time they had to.
Oklahoma played arguably their best half of basketball in the first half since early in Big 12 play, taking a 13 point lead into the halftime locker room.  The Sooners were able to build that lead with Hield only scoring seven points in the first half and Hield was scoreless until the 9:28 mark of the first half.
Khadeem Lattin and Ryan Spangler did an excellent job controlling the paint in the first half as the Sooners out rebounded VCU 25-13, however the final rebounding stats show that both teams finished with 37 rebounds.
VCU battled back to eventually take a 65-63 lead in the second half before Buddy Hield went on a tear scoring 8 straight points to put the Sooners ahead for the remainder of the game.
If you’re a Sooners fan, good and bad can be taken from this game, the obvious bad being that they gave up a 13 point halftime lead.
Overall, the Sooners performance was an overwhelmingly positive one, the Sooners first half was one of their best of the season particularly on the defensive end making things extremely difficult for VCU as they shot 38 percent from the field and turned the ball over 7 times in the first half.
Then there’s the performance from Buddy Hield in the second half that was just incredible. Every time the Sooners needed a basket Buddy was able to answer the bell. Having a guy like Buddy can carry a team a long way in March.
The play of Jordan Woodard and Isiah Cousins was huge as well with both guys attacking aggressively on offense. If someone had told you that the Sooners could win a game in which Buddy Hield went over 10 minutes without scoring, chances are you would have called them a fool. But, the Sooners were able to do just that yesterday, which was an encouraging performance from the supporting cast.
Those types of contributions will have to continue starting on Thursday in Anaheim as the Sooners take on Texas A&M in the Sweet 16.  The Sooners will need to play a complete 40 minutes against a Texas A&M team that erased a 12 point deficit in the final 44 seconds against Northern Iowa yesterday to force overtime and eventually win in double overtime.
Oklahoma will have to be sharp defensively as the Aggies are a team that can hurt you both on the perimeter and in the paint. The play of Spangler and Lattin will be key against Jalen Jones and Tyler Davis down low for A&M.
Khadeem Lattin is really a key for the Sooners to make a deep run; VCU head coach Will Wade put it best after Sunday’s game, “they can win it all if that keep Lattin on the floor and out of foul trouble.”
Oklahoma plays Texas A&M on Thursday in Anaheim, CA at 6:37 CT.
**If you want a chance to win FREE Big 12 gear from your favorite team, be sure to sign up for our weekly newsletter! **