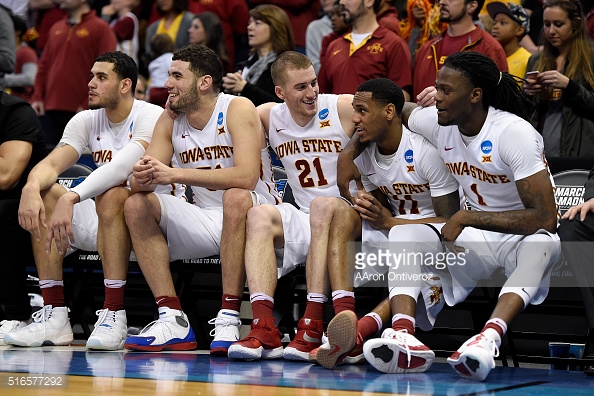 Took me awhile, but I figured out the Iowa State Cyclones! Hell, it took me all season and through the conference tourney but I’ve nailed it down…this team could have cared less about the regular season and Big 12 tourney. This team wants to build a legacy!

Based on what transpired in Denver over the course of 5 days, this version of our beloved Cyclones has had a one track mind all year…make a deep run in the tourney or go home a failure. It was why most of us were so confused all year by their play. It wasn’t a lack of skill or talent, they have simply been gearing up for a deep run. Slow down, speed up, zone, man-to-man, trying this and that to get prepared for a deep run that will differentiate them, make up for lost opportunity and cement that legacy.

Many of this year’s squad began talking about last March once they hit Denver because that was all that was on their minds. Even head coach Steve Prohm stopped a halftime interview by saying “my guys are focused”. No way were they going to lose in the first round again. No way! And if you listen to the lack of sleep comments from McKay and Niang before their first round game, you get it. They want their legacy to include heights that no other Cyclone team has seen. They want Houston!

So, the question that begged being answered was, why not tell us? Their erratic play, silly losses and first round loss in Kansas City in the Big 12 Tournament only served to piss us off! After some soul searching I landed on the fact that we should have known. As fans, we should have seen through all of this season and seen a team that said and had Final Four expectations for 2 years. They’ve had great regular seasons, won back-to-back Big 12 tourneys, captured countless individual awards and have beaten ranked teams more often than anyone over the last 3 years. But, last year’s loss to UAB stung…it still stings…and it served as a huge wake up call for these men and their new coach. They have been focused all year on making a Final Four appearance and because of all the distractions; new coach, poor play, bad losses, Naz out for the season and McKay suspension to name a few… I/we never noticed. Until Denver.

What became apparent in Denver, through their play (yes we got lucky with the draw) and through their words throughout their stay there was that they only cared about 4 wins. Regardless of who was in front of them, this team knows that 4 wins gets them to where no other team in Cyclone history has ever been: the Final Four! And the prize when you get there…anyone can win it all!

So, with a match up against 1 seed Virginia on the horizon I want to say this…thank you. Thank you so much for having a focus and a desire so strong that nothing can take you from achieving whatever you set your sights on. Thank you for the resilience to plow through frustrated fans and bad losses. Thank you for being a team. A team that I am proud to call my team.

Your legacy is already strong, but I know it’s not what you intend to do. So, stay focused, stay humble and go get the 2 wins you so covet. I’ll see you in Houston where Hilton South(er) will rise to support you and see your legacy shine!