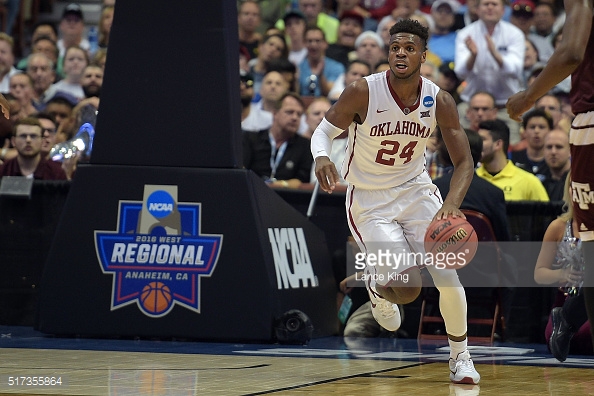 The Oklahoma Sooners put together another complete performance in their dominant win over Texas A&M 77-63. Making this performance all the more impressive was the fact that Buddy Hield didn’t put up a dominant performance by his standards, scoring 17 points and grabbing 10 rebounds.

Jordan Woodard’s play in the tournament continues to be impressive as he scored 22 points shooting 8 of 11 from the field and 5 of 6 from three point range to help the Sooners advance to their first Elite 8 appearance since 2009.

Oklahoma’s defensive intensity has continued to improve throughout the tournament as the Sooners held Texas A&M to 34 percent shooting from the field. The Sooners were able to hold the Aggies two leading scorers, Jalen Jones and Danuel House, below their average numbers with just 21 points and 7 of 24 shooting between the two.

It’s fair to say that the Sweet 16 performance might have been Oklahoma’s best game to date when you factor in the team defense and the fact that the Sooners weren’t so reliant on Buddy Hield to score in the game.

Jordan Woodard has really stepped up his play in the tournament averaging 18 points per game while shooting 55 percent from the field and 56 percent from three. His aggression on offense has certainly helped take some of the pressure off of Hield.

Another key for the Sooners has been consistent play on the interior from Lattin and Spangler both on the offensive and defensive end.

The Sooners will face off with one seed Oregon in the Elite Eight on Saturday. The Ducks earned a trip to the Elite 8 by taking care of business against Duke on Thursday 82-68.

From a national media perspective among top teams Oregon has probably been the most underrated team this season.

Oregon is a potent offensive team that can score from all five positions, they have four players averaging double figure points per game this tournament. Sophomore Dillon Brooks has led the Ducks with 19 points per game during the tournament.

The matchup with Oregon should make for a terrific game as both teams are very similar and even play similar styles. One thing from Thursday’s performance that will have to change for the Sooners to get a win over Oregon is that Buddy Hield will need a big game in order to get a win.

As I’ve pointed both teams are very similar, but if you’re asking me to make a prediction there is one difference between these teams the Sooners have Buddy Hield.