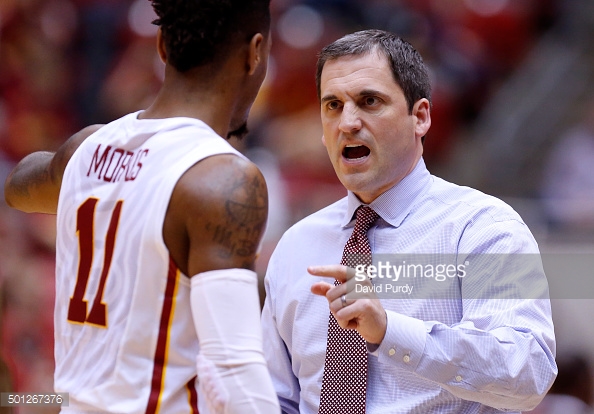 Fresh off a few days mourning the Sweet 16 loss, I somehow feel at ease even though the season is over.  Going on without Georges Niang, one of the greatest Cyclones ever, will most certainly be a challenge going forward. But, the team is losing only three players (Niang, McKay, and Nader).  The current roster along with incoming freshman and transfers should allow Steve Prohm to keep the Cyclones in the top half of the Big 12 next season.

Returning Monte Morris, Matt Thomas, and hopefully Naz Mitrou-Long (assuming he’s granted a medical redshirt) would  comprise one of the top backcourts in the country.  A healthy Naz gives us a second coach on the floor and another sniper from long range.  Thomas can shoot the trey with anyone and he’s only gaining more confidence as he’s matured.  Monte has said he’ll evaluate his draft stock after the Final Four, but this draft class is too point guard heavy to get his worth.  If he stays, he’ll likely break a 30 year NCAA record for assists to turnover ratio.  Why not lock down the Cousy Award, break an NCAA record and take his team to Phoenix (2017 Final Four), instead of playing in the D-League or riding an NBA bench.

Down low, Iowa State returns Deonte Burton, who will battle for All Big 12 status next season.  He had a great junior year off the bench, but will make even more of an impact in a starting role.  Look for Simeon Carter to play some valuable minutes after barely playing his freshman season.  In the words of Georges Niang, “his time is coming”.  Incoming transfer Emmanuel Malou, a 3-star and one of the nation’s top JUCO players, might start and play major minutes.  He should be in the running for Big 12 newcomer of the year next season.  An X-factor in the front court for the Cyclones is Cameron Lard, a 4-star 6’9 power forward from Louisiana.  ISU also picked up a nice grad-transfer from Northern Illinois, Darrell Bowie a 6’7 lefty wing who put up almost 10 points and 6 rebounds in his last season for the Huskies.  These newcomers can bring added size and toughness that Iowa State desperately needs on the glass.

A big problem this season was depth, but that could become a great strength going forward as incoming players Jakolby Long and Donovan Jackson will compete for minutes.  Long is a 4-star, top 100 shooting guard, and is 6’5’’ with a Big 12 ready body.  Expect him to get a chance to make an immediate impact.   Jackson is a JUCO player who Lon Kruger really wanted, so that’s a huge plus to keep him away from Norman.  He provides depth especially at guard, and will most likely backup Morris at the point.  Hallice Cooke, assuming he returns, can help provide some additional depth in the backcourt.

Iowa State has a tough year ahead in replacing Cyclone legend Georges Niang.  He cannot be replaced  by 1 or 2 players, but will instead take a total team effort to make up for his production.  ISU should go more than 6 deep, as they did at times this season, which should be an added luxury for Prohm & Co.

That being said, a few question marks remain for the offseason.  Will Monte come back for his senior year?  Will Naz get his medical redshirt?

No matter what happens, Prohm has done an outstanding job with his first recruiting class.  He has continued to build on the program’s success, and has added key pieces to ensure a bright future for the Cyclones.  Hilton Magic will be alive and well again next season, and it’s time for the Prohman Empire to officially begin.  Expect ISU to be a preseason top-15 team, with an outside shot at cutting down the nets in Phoenix next March.