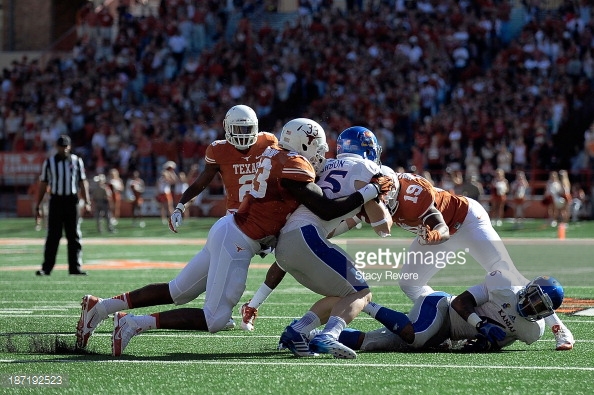 According to ABC 17,  a farmer noticed a car in the Little Maries River off Route AA outside Vienna Friday. Around 2:00 p.m., deputies found the car and Bourbon inside with a self-inflicted gunshot wound. Sheriff Heitman says the car was about five miles from the last cell phone ping authorities traced.

Bourbon played football for the Jayhawks until 2014, and played in all 12 games as a junior before missing his senior season because of an injury. Bourbon then transferred to Washburn for the 2015 season.

Kansas football coach David Beaty released a statement on the passing of the former Jayhawk Bourbon.

“Our hearts are broken to hear the news of the passing of Brandon Bourbon. Brandon was a wonderful teammate and friend. He was a tireless worker both on the field and in the classroom and was a constant source of inspiration within our program,” said Beaty. “The entire Jayhawk family cared very deeply for him and he will always be in our hearts. Our thoughts and prayers are with Brandon’s family and friends.”

Several big names tweeted out on the death of Brandon Bourbon, from former teammates, to some of the biggest-named coaches in the  biz.

Very sad to hear the news about Brandon Bourbon. Recruited him to #KU He & his family were fabulous . Prayers go out to them!

No foul play is suspected in the Brandon Bourbon case and an autopsy is not scheduled. There will be a toxicology screen this week.