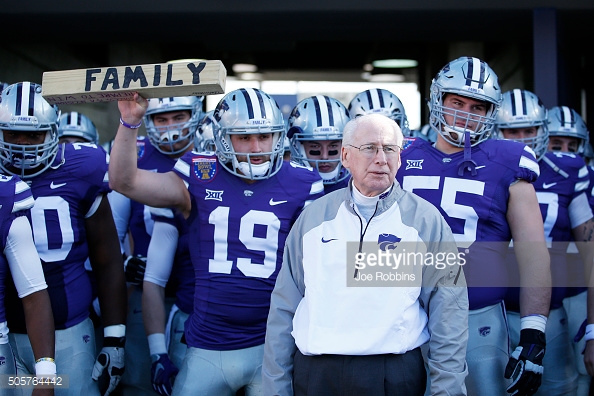 Now that spring has arrived, preparations for the 2016 season have begun. For Bill Snyder, this season will mark his 25th as head coach of the Wildcats. Last season was a roller coaster ride as the Cats ended the season with a 6-7 record, but still managed to reach a bowl game for the sixth-straight year.

The 2016 Wildcats will return 16 starters from last year’s team, including defensive back Dante Barnett who was granted a medical hardship for a season-ending injury that occurred in the first game of 2015. Having Barnett back this season is a huge boost for a Wildcat defense that struggled last season, giving up an average of 443 yards per game.

Jesse Ertz won the quarterback competition last season but never received the opportunity to prove himself as he was injured during his first snap of the opening game. Now that he has recovered, I wouldn’t be surprised if he emerges as one of the favorites to win the job this season. But, it will be no easy ride as he will face some quality competition along the way. Alex Delton, who suffered a knee injury in just the second game last season should also challenge for the starting job. But why not throw a true freshman into the mix? Skylar Thompson, a four-star quarterback recruit is the Cats’ top prospect in the 2016 recruiting class. As a senior for Fort Osage High School, Thompson threw for 2,128 yards along with 25 touchdowns. The dual-threat QB chose Kansas State over offers from Colorado, Iowa State, Kansas and Wake Forest.

Another issue facing the Cats this spring is the offensive line as they must replace four starters from last season including current NFL Draft prospect Cody Whitehair. Guys like Will Ash and Terrale Johnson could be next in line who have some experience under their belts. New additions such as Abdul Beecham, and Breontae Matthews are also names to watch for in the coming months.

Since Tyler Lockett has moved on the the NFL, the Cats have seemed to be lacking a play maker. Could this be the year that a new face rises to the occasion? Only time will tell, but once the quarterback race has been decided it’s imperative that there is some kind of offensive support. Dominique Heath looked impressive at times during his freshman campaign last season, but still has a ways to go before he can be considered as a reliable option at wide receiver. Bryron Pringle, a 6-foot-2 wide receiver from Tampa, Florida is another one of the new additions in 2016. Though it remains to be seen just how much of an impact he can have this season, he brings brings much needed size and speed to the Wildcat offense. Pringle spent last year with Butler Community College where he had 432 receiving yards along with 9 touchdowns.

As Wildcat fans prepare for the annual Purple and White Spring Game, it will be interesting to see what direction Snyder decides go in as these storylines continue to unfold. Hopefully the injury bug doesn’t bite the Cats as hard as it did last season as they look to rebound from their first loosing season since 2008. EMAW!

Can Kansas get back to a Final Four in 2016-17?
Where do Big 12 athletic departments rank in revenues?
To Top