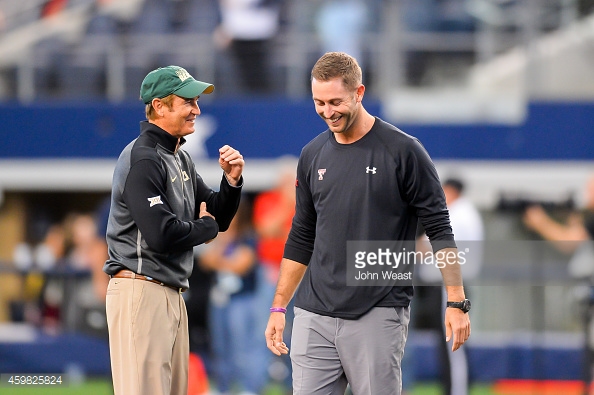 On Tuesday the Big 12 coaches held a teleconference as a chance for the media to touch base with all the coaches either during or after spring ball. The question nearly every coach was asked revolved around the possibility of conference expansion and possibly adding a conference championship game. I was surprised to hear most coaches voice their opposition for the game. I get it, but it just seems to be too obvious to not add a couple teams and a title game (and a Big 12 Network? Please, Texas?) based on the current climate in college athletics.

Here is what each coach had to say on the topic in the order they addressed the media, along with a couple other highlights from their teleconference.

On whether or not freshman QB Shane Bueuchele will start or play next fall: “The competition is still there at quarterback” and did say Buechele will see the field next fall. “They’ll get the chance to see Shane. I just don’t know how early.”

On the NCAA ban on satellite camps: “We play everyone within the league. You look at Oklahoma who got into the 4-game playoff. If we expand, then let’s say we can play TCU the last weekend [of the regular season], and the two of us have the best record, then we have to play each other the next week [in a Championship game]. So I like the system the way it is now.”

On his struggling kicking game: “I’m confident in the kickers we have on campus. Guys need to be more confident, they are rushing. It’s more mental than anything.”

On the NCAA ban on satellite camps: “If we are keeping kids from having a chance to succeed, that is something we need to look at… I do think it hurts kids at the end of the day.”

On his improvement in quality of athletes and experience: “Last year we had 3 guys who had started a Big 12 game, that experience is something we’ve built on and our strength staff has done a great job developing these guys.”

Bounces around alignment, notes he has enough on his plate: “Our job is to put a great product on the field and represent our conference. We’re trying to work on make sure we are getting our part right… I do believe at some point there will be a championship game played.”

On expansion/Championship game: “I don’t have a stance, I am aligned to our president and Athletic Director on what is best for our University and for the League. I don’t understand how when you’re playing everybody already, how a Championship Game would be that positive. Last year, after beating Oklahoma State by 35 points, we would have had to play them again the following week. With 12 teams of course it would be, but of

course then you’d have to expand.”

On expansion/Championship game: “I never thought that a team that had 10 teams that played each other throughout the season needed a Championship game since everybody gets to play each school so there is no question who the Champion is.”

On adjusting to NCAA ban on satellite camps: “We are not sure what they are going to do, we will see the final decision in ten days. My guess is they will make some adjustments, but if not, we will proceed in the proper way.”

Adjustment for Barry Sanders Jr. moving from Stanford offense to Oklahoma State’s: “I can’t talk about him at all. I got in trouble last time you guys asked me about him.”

On satellite camps: “We don’t do satellite camps. Never have. I have been to a few elsewhere. That’s what spring recruiting is for. We try to encourage guys to come to Morgantown. It’s not going to change anything that we’ve done here for the last 5 years.”

What is the next offensive trend in college football: “I’m not quite sure. Maybe the whole triple option game is going to be making a come back. I don’t know. We’ve got a plan of what we’re trying to do.”

Holgorsen did add that WVU will be running the ball a bit more.

On expansion/Championship game: “I think right now everyone is comfortable with ten. I think the smart thing to do is that if something’s going to happen it has to happen across the board, in terms of expansion and then a Championship game. I think we are in pretty good shape moving forward.”

On Satellite camps: “It’ll definitely lead to more camps on our campus. We’ll try to find ways to help those players come to us. As for more position specific camps, that’s one way, or just more dates. We can adjust our dates accordingly based on other camps in our conference. Our geographic location is a bit further away, but we just need to find creative ways and do great evaluations of guys.”

What do you consider spring game: “I think it can be a celebration of spring football and getting ready to move into fall camp. Seeing what new talent has developed and stepped up over the 15 practices.”

Progress on defense: “Quite a bit in year 2 with a lot of players back in our system under Coach Gibbs. We have a bunch of young guys who are excited to play that had backed up some starters for the past couple of years. We’ve seen a lot of progress and intensity and I expect it to be an improved group.”

On recent allegations of sexual assault against multiple former players: “It’s a process that we’re doing all we can do on our end to give them the awareness to know what they are doing and how to handle themselves at all times. It’s a situation where it’s a concern and it’s something we’re dealing with on a daily basis.”

On upcoming NFL Draft: “We hope we get two guys in there [the first round]. We potentially could have 5-7 guys draft. We are very excited and really happy for these guys to take care of their loved ones and themselves and carry on their dream of playing pro football.”

On his quarterbacks: “We know the QB is so important to any program. We are really confident in that position group heading into fall camp.”

Ever used satellite camps: “We used them at Toledo, it was huge for us. We traveled the state of Ohio, did about 6 camps in our state. As a mid-major it was huge for us working Ohio State, Michigan State, and Michigan. We used that as an evaluation tool and an opportunity to help the parents of recruits and sophomores and juniors to financially be able to save them some money.”

On hiring former Oklahoma State QB J.W. Walsh: “He is a coach’s son, he knew our system, our guys knew him, and he’s been working hard.”

Latest on his quarterback battle: “Kenny Hill ans Sawyer are the two leading candidates. But, we both want them to work through the summer months and see who takes the leadership. It worked for us two years ago with Trevone Boykin vs. Matt Joekel.”

Expansion/Championship game: “They’re not going to ask me. That’s above my pay grade. That being said, it’s tough to have a round robin. It’s a tough situation. I like the model that we have now, even though it’s tougher. It’s be easier if we went to expansion. I have no problems with the way we do things.”