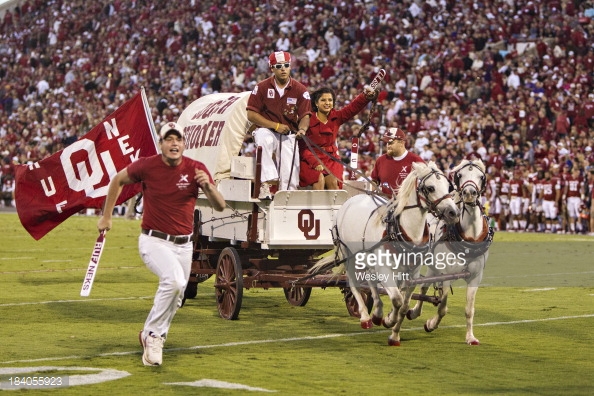 The world of PC bullsh*t continued on Wednesday. But it came from an unexpected place: the University of Oklahoma. The Undergraduate Student Congress voted against a resolution that would have allowed Congress to publicly say “Boomer Sooner” to congratulate OU athletic teams.

“Opponents of the resolution argued against it because of the controversy of the phrase “boomer sooner,” an issue brought to the forefront in September by student group Indigenize OU, which argued that the phrase contributes to the erasure of Native people and their history. Others worried that it would show favoritism to sports teams over other campus groups.”

The resolution was voted 13 for and 20 against, with 1 abstain.

Pete’s Take: Holy sh*t! This is truly f*cking unbelievable. I don’t think I’ve cursed this much in one post on this site … ever. But, this is disgraceful. If I was an OU student, I would wear a shirt that says ‘Boomer Sooner’ every day. Or at least until they started to smell horribly of sweat and booze (then I would wash it immediately and put it back on).

A group called Indigenize OU released a statement expressing their satisfaction with the vote.

In the statement Indigenize OU noted: “We think it is a major step in the right direction for non-natives to see “Boomer” and “Sooner” as problematic language with real and violent consequences.”


Oh. My. _____. God. This is a new low. This makes the ‘Redskins’ and ‘Indians’ argument actually look fairly reasonable. This truly has become the whiniest generation in America (which, mathematically I am technically apart of) and continues to defy expectations (not in a good way).

If you recall, the Sooners were those who cheated in the Oklahoma land rush by leaving before the boom of the cannon. Was settling Oklahoma a hindrance to Native Americans? Yes it was. But, at that point, manifest destiny was already in full swing. It is groups like Indigenize OU (who’s twitter page proves they are nothing more than a bunch of race hustlers with an anti-police agenda)  that seek not to remember history, but to change it. To make themselves and others victims. To give people an excuse. Find me a 19-year old kid on the OU campus who yelled ‘Boomer Sooner!’ and felt some kind of racial connotation. You can’t, because it doesn’t exist!

Here is a tweet from one of IOU’s members:

Yes, that had that really horrible situation last year when students were seen yelling racial slurs on the fraternity bus. But, guess what? President Boren wiped them off campus immediately. Right away, no questions asked.

I am all for freedom of speech, but when it gets in the way of common sense, that’s absurd.

Give us your thoughts in the comments.