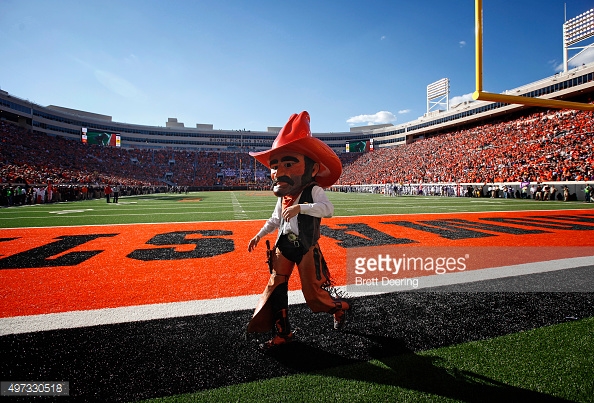 The spring game in Stillwater is always a good time. The way Oklahoma State and Mike Gundy play it is how they all should be done. The coaching staff splits the team up into what they think are even squads and play an actual game. No strange offense vs. defense format with points for first downs and sacks, just points for touchdowns and field goals. The coaches call exotic plays to try to out do one another and for the entertainment of the fans. They even do sideline interviews on the big screens with current and former players during the game. Admission is free, people tailgate, and afterwards they let the fans on the field at Boone Pickens Stadium to mingle with the players and special guests. I usually attend with an old friend and her family. Her teenage daughter has tried unsuccessfully to get Mason Rudolph’s picture and autograph after the spring game for two years now. She’s in love with him, but unfortunately for her. so is everyone else, so he draws the biggest crowd and she can’t get near him.

What most of us go to the spring game for is to see how the team looks. To figure out what to expect next year. Are they better? Are the worse? Contender or pretender? So what did I learn about next years squad from the game?

Spring games are vanilla by design. Besides the occasional spicy offensive call it’s all base offense versus base defense with Gundy blowing a very quick whistle to avoid injuries. But, I did make one very important observation: the running game still needs a lot of work.

It’s the same story as last season. Rudolph is elite, the receiving corp is deep and talented, and the running game looks mediocre. The final rushing stats were 70 yards on 43 rushes. I’ll let you do your own math on yards per carry. It’s very ugly.

Without a decent rushing attack the Cowboys won’t go very far next year. The Sooners are loaded and in it’s second year, Lincoln Riley’s offense will be humming. Baylor will be just as good. Texas will be much improved. Texas Tech will be dangerous. And the favorable schedule from last season flips to game in Norman, Manhattan, Waco and Fort Worth. Oklahoma State got by with a lot of luck last year to win 10 games, but that kind of stuff usually evens out. I’d expect close games that come down to a fortunate call or bounce of the ball to go the other way next season.

Maybe, despite losing Ogbah and Bean, the defensive line is going to be great. Maybe Barry Sanders (no, not THAT Barry Sanders, his son) will show up this summer and completely take over in the backfield. Maybe the running game looked bad because the defensive players are used to all the plays from practicing against them all spring.

But, the truth is the offensive line just isn’t what it needs to be to compete in the Big 12. I like all of the running backs. Chris Carson runs hard and is agile for his size. Renny Childs has a great blend of speed and power. He had a great play Saturday where he stiff armed two defenders on his way around the corner for a good gain. Jeff Carr looked ready to show off his speed and should be a great change of pace back and receiver out of the backfield. And of course Sanders comes in this summer.

I like offense line coach Greg Adkins and I think he’ll do an amazing job. He coaches hard, he recruits hard, and his players play hard. The struggles along the line aren’t for lack of effort or want or heart. But it takes time to rebuild that position and unless the group makes a substantial leap during the summer and fall camp I think Cowboy fans are in for another frustrating year from the running game. And there’s no J.W. Walsh to rescue the team in short yardage situations this time.

Without a running game to take the pressure off of Rudolph and his receivers, it will be a long year for the offense.