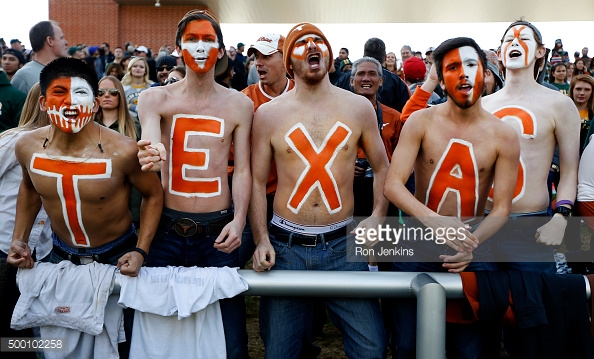 So the news came down on Monday and, well, I wasn’t the least bit surprised. Big 12 Commissioner Bob Bowlsby said that their data compiled by consultants indicated that the best model for placing a team in the College Football Playoff is a 12-team conference playing 8 league games with a conference championship game.

First off, while these guys that run the Big 12 (and the other conferences) are bright individuals, it’s amazing how they can outsmart themselves sometimes. Did you really need to go hire an outside “independent consultant(s)” to figure this out for you? Sure, two years of data is not an enormous amount to go on.  But, CFB committee chair Jeff Long was basically begging, or telling, the Big 12 to either 1) expand or 2) add a darn conference championship game.

What more did you need to know then when TCU dropped from 3rd to out of the playoff two years ago (after smoking Iowa State by 50+ points). Since that point, we at Heartland College Sports have been begging the conference to, at the very least, add a conference championship game.

Bowlsby will be discussing the matter further with the league’s athletic directors and football coaches during their annual meetings this week. Then, he’ll do the same in late May with school presidents and chancellors in Irving, Texas.

So, Bowlsby more or less said, it benefits the conference to add a title game. Oklahoma President David Boren is the Big 12 board chair and is one of the most powerful presidents in college sports. Guess what he wants? Big 12 expansion. Now he has the “almighty data” to back it up. This conference is going to expand … or let’s put it this way: It should. Although, there is an elephant in the room. The same elephant that has screwed everything up for the Big 12 over the past decade: Texas.

ICYMI: From @Enquirer, belief is Texas is getting Texas Tech and TCU to block expansion. 7 Big 12 schools support it, but need 8 to approve.

This is a problem. A BIG problem.

Now is the time for Boren and the rest of the Big 12 to grow a pair and stand up to the Longhorns, who have done enough damage to the conference as is. The loss of Nebraska and Texas A&M continues to hurt on both the national respect front and the recruiting front, while Missouri and Colorado were good fits that should have remained in the conference. But, for better or worse, they got tired of the Longhorns superiority and antics.

The reality is this: Texas currently has a television contract (Longhorn Network) with ESPN through 2030, but has lost $48 million to date, according to the San Antonio Express-News.

To parlay off that, John Ourand of the Sports Business Journal wrote a fantastic piece explaining how the price for media rights are still strong, but have been declining for certain products. Example: they’ve remained strong for good products like Big 10 football and the NCAA Tournament, but not as much for various tennis and soccer programs.

So, does Texas really think that there is a future for their Longhorn Network? There isn’t. Especially not as long as they are showing primarily Olympic sports like swimming, softball, and soccer.

It would behoove the Longhorns and the Big 12 to blow up the Longhorn Network (which Boren is trying to do), add two teams of value, and create a Big 12 Network. It’s imperative to get in the door with a mega deal before the money dries up for these networks. Between Texas and Oklahoma, along with Kansas basketball, the three biggest draws, someone will pony up big bucks for this package. As Ourand pointed out, networks will still pay for products they see as having value. But, if the media landscape continues to change as drastically as it has been in the past 18-24 months, the offer may not be on the table a year from now.

I’ve changed my tune on this since I last gave it serious thought. There are two obvious answers, with a possible wild card.

My preference would be BYU and Cinci.

I know there are drawbacks to the Cougars such as the distance from Morgantown, West Virginia (nearly 2,000 miles) and the fact that they don’t play sports on Sundays. I think it’s time to get over that. College expansion has become as such where the separation of 1,000+ miles between schools is no longer an issue. Nebraska is playing at Rutgers, over 1,200 miles. And, if super conferences are the way of the future, you could have UCLA playing Louisville one day.  With the speed of technological advances, letting mileage get in the way would be silly.

BYU brings the biggest national brand of any possible addition. Many in Big 12 country and the East Coast may not appreciate that, but with an undergraduate enrollment of nearly 28,000 and an endowment of over $1 billion, BYU is a national presence.

Plus, don’t forget, ESPN thought highly enough of BYU as an independent to agree to an eight-year TV deal back in 2010.

Then, there is Cincinnati. In reading the Cincinnati.com piece, they made an excellent point that Cincinnati was ranked No. 25 by ESPN in college football TV market viewership. That’s higher than every market in the Big 12, outside of Dallas-Fort Worth.

Those are the kind of numbers that drive these ratings. Also, those numbers and the popularity of college football would shoot up in the region, if say, Oklahoma or Texas was coming to town, instead of SMU or Tulane. Cincinnati, naturally a strong football region with good high school ball, with fall in love with Big 12 ball.

Central Florida is the wild card because Orlando is a top 35 TV market, UCF has the second largest enrollment in the country, and, from a recruiting standpoint, it gets the Big 12 in the SEC’s backyard. But, the reality is, UCF carries no weight in today’s college football landscape and there is limited desire from the current fan base. But, if the Big 12 went with UCF, I would understand. It would be part of a long-term vision.

All in all, it’s time for the conference to move, and move fast. They got their silly consultants to finally side with those of us who have been screaming from the hilltops for well over a year. So move, now. Boren and company must bully Texas. They are vulnerable. Their network is losing money, they are undergoing a regime change with new AD Mike Perrin, and their big money teams have not been good.

Let’s move it fellas. If not, you’ll be eaten alive in the next batch of realignment. It’s time to not only preserve, but grow, and expand, this fantastic conference.

2016 NFL Draft: Grading Big 12 first round selections
Would Bill Self or Shaka Smart ever make jump to the NBA?
To Top