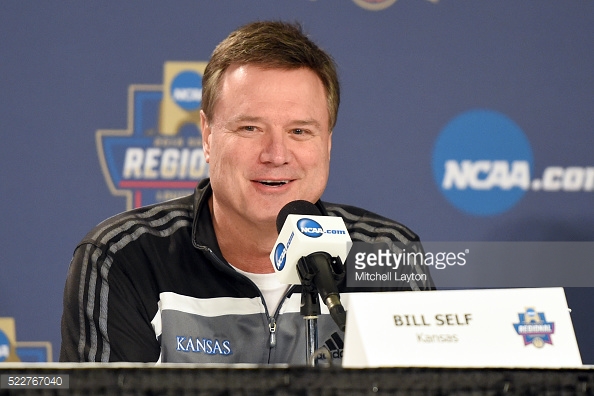 Could Bill Self or Shaka Smart bounce for the NBA? Specifically, could they bounce for the Houston Rockets? It’s the topic that’s been discussed ad nauseum over the past 12-24 hours.

Why? Many thanks to ESPN’s Marc Stein for getting this chatter going!

Can’t speak to the NBA aspirations of either one, but sources say two college coaches who intrigue the Rockets are Shaka Smart and Bill Self

I’m surprised by both names popping up, mostly because of Rockets GM Daryl Morey’s reliance on analytics. Frankly, I don’t associate Self or Smart as having a strong analytics background. Then again, it hasn’t quite infiltrated the college game as much as the NBA.

Starting with Shaka Smart, there is nothing about him or his style that strikes me as an NBA head coach. He’s perfectly suited for the college game: younger, relatable, intense, defensive-minded. Can you envision Shaka Smart running his havoc press defense in the NBA? Are you kidding me?! That $20 million per year players want to do that? It would be fascinating, but it would have to be the perfect fit with a very young core of guys. Even then, I’m pretty sure it wouldn’t fly.

Plus, think of all those times Shaka Smart is on the sidelines with his ass to the ground, arms out, posing, and reminding his players to ‘wreck havoc.’ I don’t think James Harden hasn’t gotten that low on defense in his entire career!

If there was a fit for Shaka Smart in the NBA, it sure as hell isn’t the Houston Rockets. The personnel doesn’t fit his style; it’s too veteran of a team. Plus, there is no worse place to be in the NBA that running a team that is consistently in the 6-8 range of the playoff standings. You’ll never make a run to an NBA title, but you’ll never draft high enough to land a superstar.

While there might be some within the Rockets organization that buy into Smart’s style, ultimately the players have to. And there is no way in hell you’re getting James Harden and (pending his contract situation) Dwight Howard to buy into ‘havoc’. It just won’t happen.

As for Bill Self, he’s another bizarre potential choice by Houston. He’d be a slightly better fit than Smart, but that really isn’t saying much. So, Self loves big guys, we know that. But, would he love Dwight Howard (assuming he picks up his player option or re-signs)? God no. There has been no bigger disappointment in the NBA the past few years than Howard. His skill set is minimally better than it was early in his Orlando days. His post moves are, for the most part, garbage, and he still relies far too much on his power, strength, and pure athleticism. At 30 years old, Howard’s best days are behind him.

I could understand Self wanting a new challenge. The man has won 12 straight Big 12 titles. Damn impressive. But, he still hasn’t had the success in March to back it up. Self has been at KU since 2003 and has only been to two Final Fours. Maybe I’m not giving him enough credit, but let’s be honest, if you aren’t a die hard KU fan, wouldn’t you have though it’s been more than just two Final Fours? I sure would have. So, part of me believes Self is looking to get himself to that upper echelon of college coaches by reaching at least a couple more Final Fours and, ideally, another National Championship … or two?

If Self were to get tempted by the NBA, I would assume it would be after his son, Tyler, is gone. Tyler is currently heading into his final season with the Jayhawks. I’d imagine that’s something special that Self would want to cherish, rather than jumping to babysit James Harden and (potentially) Dwight Howard for six months a year.

On the money front, Self’s salary of $3.9 million would be around the middle of the pack in the NBA. He’s not far off from legitimate NBA money. Can another couple million buy you more happiness? Maybe for some people. I don’t believe Self is one of them.

Lastly, what happened with Fred Hoiberg and the Bulls this past season should be a cautionary tale for any college coach considering the NBA. But, since Hoiberg was a Big 12 coach, it rings even more true. I don’t believe for a second that Hoiberg doesn’t have regrets about leaving Iowa State. He must. He has to. His situation with the Bulls is terrible. Hoiberg has had players calling him out to the media, the team tanked and missed the playoffs, and he’s had many in the media wondering whether he was the right man for the job.

In Ames, Iowa, Hoiberg was “The Mayor”. He was the prodigal son who could do no wrong in the eyes of most fans. I realize he had the desire and NBA background to make the jump. But, outside of a handful of NBA jobs, the rest of the gigs are just placeholders for a couple years until the owner/GM decide to move on.

The season is a grind, the players are multi-million dollar prima donnas, and the job security is limited. How will Billy Donovan feel about his gig in Oklahoma City if Kevin Durant bounces in free agency this summer? All of the sudden, he might be wondering what the Florida Gators are up to.

I’m not saying guys shouldn’t consider the NBA. For some, that’s their dream. But, all coaches should proceed with caution. The fit must be right. And in this case, are the Houston Rockets the ‘right fit’ for Shaka Smart and Bill Self? Hell no.