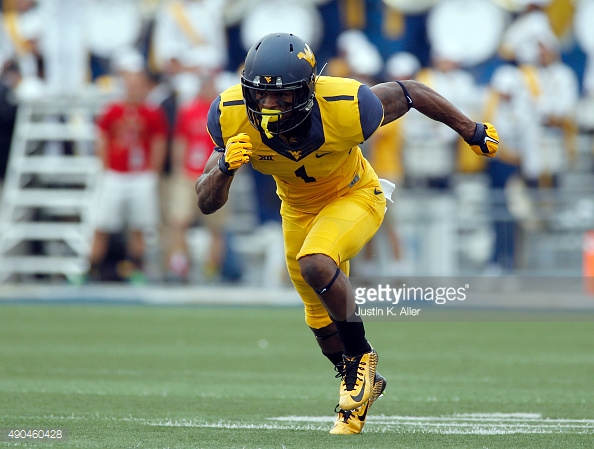 The West Virginia Mountaineers football program has achieved something no other team in the last 5 years can equally claim. In four of the last five NFL Drafts, the Mountaineers are the only school to have a player drafted in the top 15. The run started in 2012 when Bruce Irvin was drafted 15th by the Seattle Seahawks. St. Louis grabbed Tavon Austin 7th in the following 2013 first round. There were no ‘Eers taken in the first two rounds in 2014, but Kevin White heard his name called 7th overall by Chicago in 2015. And in last week’s 2016 NFL Draft, the Oakland Raiders made Karl Joseph the latest Mountaineer selected in the top 15, taking the safety 14th overall. After losing 20 (!) seniors from last year’s squad, these are some players to watch for the Mountaineers in the upcoming season.

Shelton Gibson (6’0”, 190 lbs) returns from a sophomore campaign that saw him lead all Mountaineers with 887 receiving yards and 9 receiving touchdowns. Gibson also had the largest yards per catch average of all Mountaineers who caught at least 5 passes, with 24 yards per catch. One thing Gibson has in common with former WVU standouts is his speed. Running in the mid-4.4s, Gibson caught 14 passes for at least 20 yards last season. Another season playing with quarterback Skyler Howard should only help the young receiver’s game develop. Austin and White were taken in the top 10 for their blazing speed and record setting receiving performances; if Gibson can improve on his team-leading numbers from last season, his NFL stock will quickly rise.

Rushel Shell is one of the most intriguing Mountaineers on the roster. The soon-to-be-senior running back split time last season with Wendell Smallwood, who was a 4th round selection of the Eagles in last week’s draft. Shell has amassed 1,496 rushing yards & 15 touchdowns over the last two seasons in Morgantown. Standing at 5’10”, 220 lbs., Shell is a bruiser who invites contact. He’s not a huge influence in the passing game, but is capable when called upon, catching 37 passes over the last two seasons. If he could add a little flash to his already brute force, Shell would be a difficult backfield threat to contain.

Another senior on this list is center Tyler Orlosky. Listed at 6’4”, 295 lbs, Orlosky has started the last 26 games for the Mountaineers and 29 over his career. An All-Big 12 First Team selection in 2015, Orlosky was used on 965 offensive plays. Most would say he was the leader of an offense that was 17th nationally in rushing and the 23rd best overall offense in the nation. Teams in the NFL look at the center position for consistency and leadership, and Orlosky boasts both qualities.

Dravon Askew-Henry has started all 26 career games at safety during his two seasons at WVU. An underclassman, Henry will be the only returning starter from last season’s secondary. That experience – which includes a team-high 952 defensive snaps a year ago – should make for a great junior campaign. Reliability is important for a young secondary, and having Henry to make on-field checks will prove to be significant. One area he’ll have to improve is creating turnovers. Interceptions from a centerfield-like safety are imperative to winning, a place Henry was unable to contribute a year ago. Karl Joseph led the nation in interceptions last season before tearing his ACL, and that role was never quite filled. One thing is certain when discussing Henry – he’s always on the field.

Senior defensive lineman Noble Nwachukwu has started all 26 games over the past two seasons for the ‘Eers. A solid contributor along the defensive front as a junior, he led the team with 8.5 sacks and 13 tackles for loss last year. Standing 6’2” and weighing 275 lbs., Nwachukwu has ideal size for an NFL body.

These are just a handful of players WVU has high expectations for. Other players to keep an eye on are wide receiver Ka’Raun White (younger brother of Kevin White), sophomore wide receiver Jovon Durante, Miami (Fl.) transfer defensive back Antonio Crawford, defensive back Rasul Douglas, and safety Jarrod Harper.