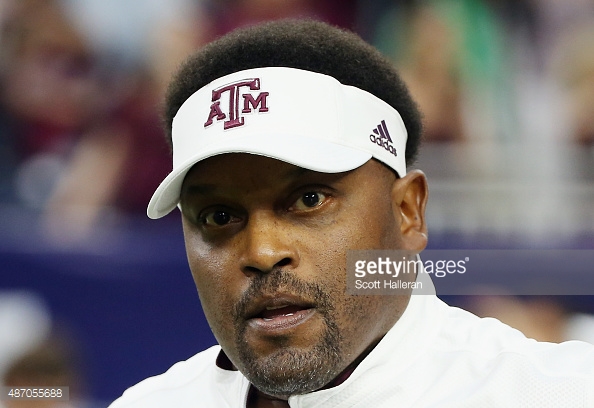 Doesn’t it seem like just yesterday that Texas A&M fans were bragging about their football successes? They had left the Big 12, joined the SEC, and made an immediate mark behind coach Kevin Sumlin and star QB Johnny Manziel.

The Aggies finished the 2012 season 11-2, T-2, in the SEC West, Manziel won the Heisman, and A&M smoked Oklahoma in the Cotton Bowl 41-13. At the same time, the Texas Longhorns continued their mediocrity, going 9-4, 5-4 in Big 12 play, in the second to last season under Mack Brown. All was well in College Station!

Unfortunately for the Aggies, that success could not be sustained. Since then, Sumlin has put together campaigns of 9-4, 8-5, and 8-5 with trips to the Chik-fil-A Bowl, Liberty Bowl, and Music City Bowl.

Despite the transition back to mediocrity on the field, A&M was still dominating the recruiting trail, Sumlin was the “King of Texas”, and there was reason for optimism in College Station. Over the past several months, that all went away. There have been the high profile transfers (Kyle Allen, Kyler Murray), the ass-kicking at the end of the 2016 recruiting season by Texas (UT won 8 straight head-to-head battles), and now, the well-documented disaster by an assistant coach, which has led to other high-profile decommitments (see below).

There’s no need to feel sorry the 12th man. They weren’t exactly the most gracious on their way out of the Big 12. The funny and ironic part is that this impressive self-destruction is good news for the Big 12.

First off, it puts Texas back in the driver’s seat as the superior program in the Lone Star State. Sure, Charlie Strong still needs to prove it on the field and this is a huge year for the Longhorns. But, all the momentum across Texas is with UT. Between a fantastic finish to the 2016 recruiting class and a great spring highlighted by true freshman QB Shane Buechele, everyone in Austin is feeling as positive as they have about football in nearly a decade.

But, the rest of the Big 12 should look to benefit and capitalize from this A&M debacle. Since A&M joined the Big 12, the SEC has made a major move in recruiting west into Texas, which was always prime time Big 12 country.

Below is a chart I put together comparing the number of Big 12 recruits from Texas to the schools outside the state of Texas. I used the year 2010 (pre-Big 12 realignment) and 2016. I left out West Virginia since it would be unfair and pointless to compare their Texas recruiting in 2010 (Big East) to 2016 (Big 12). Also, I left out Kansas because new head coach David Beaty is a former Texas HS coach who has heavily recruited the state in his early time on the job.

This chart is very telling. You can’t simply chalk up all these numbers to being “outliers”.  I realize coaches like OU’s Bob Stoops has made a more concerted effort to expand his recruiting nationally. But, why? I never understood it. Texas is his backyard, and OU, at it’s best, dominated the recruiting scene (along with Texas), in the Lone Star State.

Also of note, the state of Texas has growth about 20% in every census dating back to 1950. Why would Stoops take his foot off the pedal in recruiting the state? Because he realizes the competition has stepped up with the SEC now in town. If I were running the OU football program, I would remain focused in Texas, while keeping an eye on the national scene.

Oklahoma State, a poor man’s Oklahoma, also lived off the state of Texas for recruiting. Their numbers are down big time as well over the past six years. Instead of hammering Texas, Mike Gundy’s staff has branched off to Louisiana, Arkansas, and others. Also, you can see this trend affecting, to a lesser degree, Iowa State and Kansas State.

So, with the various debacles surrounding Texas A&M, the improved recruiting in Texas by the Longhorns, and the expansion news and excitement surrounding the Big 12, this should be a chance for the conference to regain their stranglehold on the recruiting scene in Texas. Is Iowa State going to beat out Alabama for a 5-star guy? No. But, if Texas can regain it’s dominance, A&M takes a step back, and players regain interest in the Big 12, along with the style, and the respectability nationwide, it can be done.

Would Bill Self or Shaka Smart ever make jump to the NBA?
Report: Oklahoma was within ’30 minutes’ of bolting for Pac-10 in 2010
To Top