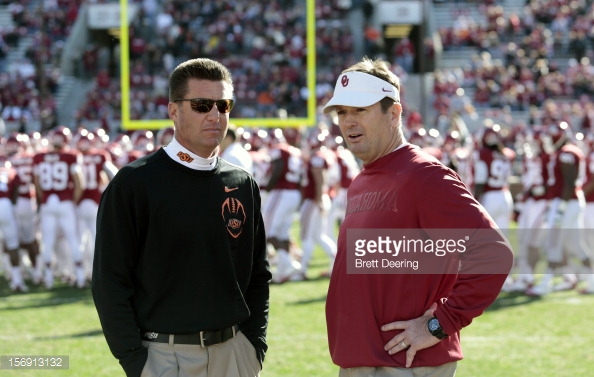 Another offseason and another round of the same questions:

2) Will another conference poach teams for their own expansion?

3) Will Texas finally agree to the better good, give up their network so the Big 12 can have its own, and help to stabilize this whole messed up situation?

As always, no one has the answers, and the people that make these decisions keep a tight lid on what they are actually thinking. Keeping it a secret gives them an advantage if the chips start to fall so don’t expect any clarity on what’s going to happen until it’s already happening.

For what it’s worth my guesses on the above questions are as follows:

1) Unlikely. Unless something bizarre happens, such as an undefeated Big 12 team getting left out of the CFB Playoff. Plus, if Texas really does have Texas Tech and TCU by the balls, the conference only needs 3 teams to vote against expansion to remain with 10 teams.

2) No, OU and Texas aren’t ready to bolt quite yet and they will be the first two to go, OU specifically.

The odds of the Big 12 being around in its current form five years from now are zero to none. Maybe they bring in a couple other schools to get to 12 but even that will just be a bandage in my opinion. The teams available would just water down the conference, and with the constant fear of the Big 12 blowing up they aren’t stealing any good teams from anyone else. No, it’s much more likely a few schools choose to leave for other conferences, and as an Oklahoma State fan, if it’s going to happen the sooner it does the better off we’ll be.

OSU is in a good place if realignment happened right now. They’ve been winning at a good rate, one of the best in the conference the last five years, with a conference championship, a Fiesta Bowl win, a couple of Cotton Bowl appearances, and a Sugar Bowl invite. They’ve got a bright, shiny football palace with brand new practice facilities. All these things go a long way to being attractive to other conferences. They don’t like to invite bums. They want winners and/or television viewers. Since the state of Oklahoma doesn’t have as many people as most major cities, those other factors matter more. If this happened 20 years ago when the Cowboys were winning four games a year in the old, rusty stadium we’d be on the outside looking in.

But even more important than what they’ve been putting on the field, and the stadium that field is in, are two names:

Boone Pickens needs no introduction in the Big 12. The Texas billionaire swings a big stick in these parts, and he’s not afraid to swing it for his Cowboys. He can apply political pressure and make financial promises that would probably get OSU into the conference he wanted them in. Plus, don’t think that OSU Athletic Director Mike Holder wouldn’t ask for his help if he felt it was needed.

The second name belongs to OU President David Boren. Despite the fans pretty much hating each other, the University of Oklahoma and Oklahoma State have a pretty decent working relationship. Boren and Oklahoma State President Burns Hargis understand that it’s a better situation for the universities, and the state of Oklahoma, if both of the schools to see eye to eye on some things. Boren has said more than a few times that he would prefer the schools to stay together, if any realignment happens. OU has the football caché to say to the PAC 12 or SEC “yeah sure, but these guys come too.” The Sooner brand is worth so much to a conference that it would happen. It’s like when a teenager wants money to go to a movie but his mom makes him take his little brother along: it happens. Having a friendly face in charge of that school down the road would be a huge advantage.

But, what about a decade from now? Boren won’t be Oklahoma’s President forever. In ten years he might be sipping drinks on the deck of his boat named Boomer up on Grand Lake. And maybe the new President isn’t as keen on his orange little brother as Boren is.

Boone Pickens turns 88 in a couple weeks and isn’t that far away from his spot on the big oil rig in the sky.

Ten years from now Oklahoma State might be completely on its own in realignment, with a not so new anymore stadium, no big gun booster, and no friends in Norman things might end up a lot different then they would right now.

In a sense, if realignment is inevitable, and the Big 12’s days are numbered, the sooner the better if you’re an Oklahoma State fan. Time isn’t exactly on our side.