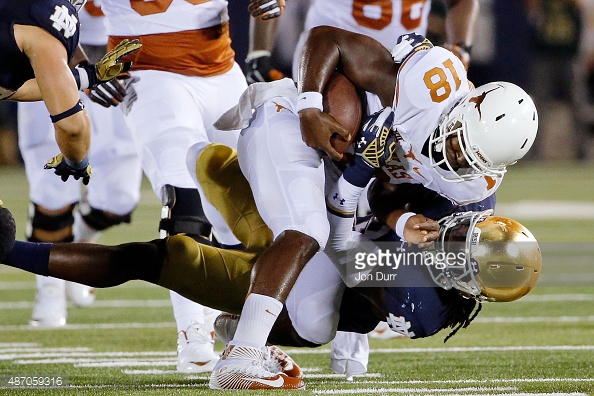 It’s being dubbed the “greatest opening weekend in college football history”.  And you know what … it’s hard to argue with that assessment.

On Tuesday, ESPN announced its selections for opening weekend, and the match ups are sure to keep your fingers busy on the remote control.

Pete’s take: DAMN. Summer isn’t even hear and I am already jacked up! I always hate rushing summer to get to college football, but this weekend slate of games might make it worth it.

Anyway, I am picturing the dream scenario for Longhorns fans: Shane Buechele is named the starter, leads UT to an upset victory in front of the Nation, and BOOM, the Texas Longhorns are back on the map. (We won’t even bring up last year’s 38-0 shellacking by the Irish). That would be great for Texas, the Big 12, and college football.

As for Oklahoma, obviously they didn’t anticipate this being a potential top-15 match up when the game was scheduled. I would hate to think a loss could knock them out of the CFB Playoff… but, it’s possible. Also, if Houston wins and runs the table, is that enough to justify a Final Four bid? Things could get very interesting stemming from these two games. In the words of former Jets linebacker Bart Scott: CAN’T WAIT!

Can Facebook, Amazon or Netflix save the Big 12?
Reddit Poll: Texas, Baylor rank in top 10 most hated college football teams in America
To Top