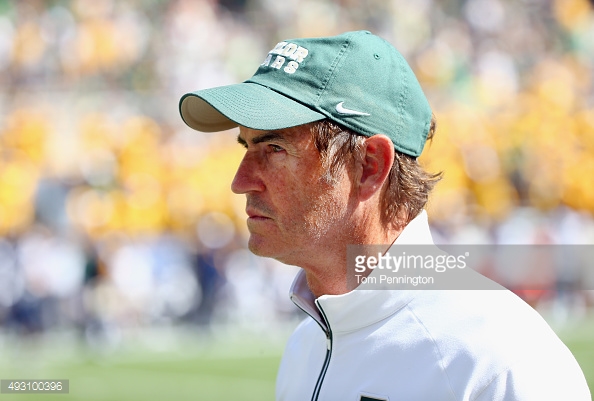 The hits keep on coming against the Baylor Bears and the entire football team and athletic department. ESPN’s Outside the Lines has put together a damning piece in which they report, “at least some Baylor officials, including coaches, knew about many of the incidents, and most players did not miss playing time for disciplinary reasons. None of the incidents has been widely reported in the media.”

Then there is this allegation from Outside the Lines:

In one case from 2011, an assault at an off-campus event in Waco ended with three football players being charged as well as Baylor and Waco police discussing the incident. Waco police, according to documents, took extraordinary steps to keep it from the public view “given the potential high-profile nature of the incident.” According to a police report obtained by Outside the Lines, Waco’s investigating officer asked a commander that “the case be pulled from the computer system so that only persons who had a reason to inquire about the report would be able to access it.” The report was placed in a locked office.

And… as the article went on:

In the report, an officer wrote that the student didn’t tell police what had happened when they first saw him hours after the assault. “I asked why and he … told me that he figured because they were football players then nothing was going to be done anyway. I asked him why he thought that and he said that he has heard anecdotal stories of football players getting into altercations or disturbances and nothing ever being done.”

Pete’s Take: If you read the entire report, this is just more horrible news for Art Briles and the Baylor football program. Basically, what Briles was doing was bringing in the best football players he could to a program he was trying to build, regardless of character, in order to try and win football games. A few years ago, 4-star players with issues didn’t go to Oklahoma or Texas, because those two programs could get the same kind of player, but with a cleaner background. Briles and Baylor could not. So they had to take risks. It’s something that’s been done for decades across the college football landscape. But, Briles either took those risks to an extreme level, or just got really unlucky with a terrible crop of individuals.


You wonder if this has gotten to the point where Art Briles is feeling some heat. So far, the guy has appeared to be absolutely bulletproof. But, when does that end? When and where does Briles become at least somewhat responsible for what happened?

I have yet to hear President Ken Starr or Athletic Director Ian McCaw question or say anything negative about Briles or some of the people he brought to campus. Maybe that’s because they knew about some, or most, of this? We may never know that.

But, we do know that Baylor has since built a brand new football stadium, been ranked in the top-5 with a chance at making the College Football Playoff, and has seen their national footprint expand dramatically. So, maybe none of this really does matter? We may soon find out … but probably not.