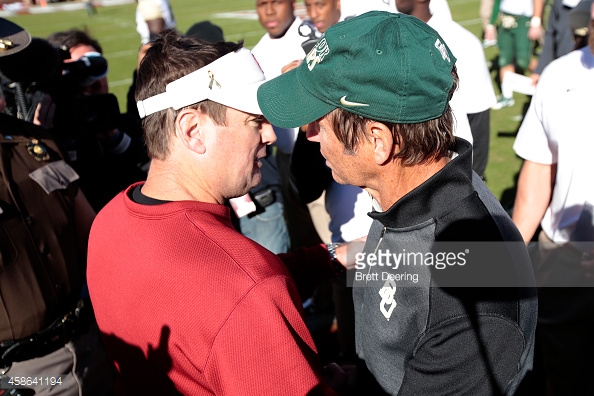 Late last week the Golden Nugget released the first college football season win totals for 2016 in Las Vegas, giving us a look at how teams are being perceived heading into the upcoming season. Not every team was included on the list. In fact, there were only four Big 12 teams on the list. So, for the sake of killing time in mid-May, let’s go ahead and make some early predictions for the following four teams and their over/under possibilities.

Oklahoma joined Clemson, Florida State, and Tennessee as the only teams listed at 10. But, when you look at the Sooners schedule, they could be sitting at 1-2 after 3 games, and needing to run the table to win the Big 12 and reach the 10 win mark. Hell, even if they split their games vs. Houston and Ohio State, they need to run the table to make money on that bet.

Don’t get me wrong, I certainly believe OU can go 11-1, or dare I say, 12-0. But remember, this is a different question: you’re asking which side of the wager do I have just slightly more confidence in happening. The answer is the under. OU will have their hands full with Greg Ward Jr. and the Houston attack, especially for a defense that lost some key pieces in the secondary. Then, two weeks later, Urban Meyer, J.T. Barrett and the Buckeyes come to Norman. Yes, OSU lost a ton to the NFL Draft, but Meyer is just reloading. If anything, OU has an advantage since they are home and Ohio State will still be young.

As for the Big 12 schedule, OU is at TCU followed by the Red River Rivalry in back to back weeks. There is a trip to Morgantown, and then Bedlam, which could be for a Big 12 title. My gut says a push, but I’m not here to pussyfoot around and give you half-hearted predictions. So, gun to my head, I’m taking the under.

I don’t think Art Briles loses his job at Baylor. In fact, I think this season turns into a big ‘F U’ moment as Briles riles up his guys with an us against the world mentality. Yes, there are pieces missing in the front seven, but the offense will hum behind Seth Russell (or Jarrett Stidham), along with WR KD Cannon.

Baylor has their usual super soft non-conference schedule, featuring the mighty Northwestern State Demons, the nasty SMU Mustangs, and the robust Rice Owls. Boom, that’s 3-0. Then, Baylor would have to go 5-4 in conference play to fall under the 9 wins. At worst, this is a push, but, I still see another 10-win season coming to Waco. Oklahoma State and TCU are home games, while OU is on the road.

But, this over/under could ultimately be decided the last two weeks when they play against Texas Tech in Dallas and then at West Virginia, always a tough place to play, to end the season. Still, I very much like the over.

Mike Gundy comes from the “Art Briles school of scheduling”. If he had it his way, Gundy would also play 3 cupcakes per season. But, thankfully, AD Mike Holder has some sense of respect for himself and the program. So while last year’s schedule featured Central Michigan, Central Arkansas, and UTSA, at least this year Oklahoma State gets Pittsburgh, a decent Power 5 program.

All that being said, Oklahoma State should be 3-0 heading into Big 12 play. The conference schedule isn’t easy, with road games at Baylor, TCU and Oklahoma, but even if OSU loses all those games, they could still end up with the over (and I don’t think they lose all 3). Mason Rudolph is a Heisman dark horse and the defense is very solid. The only question mark is the offensive line and running game. If those units can pick up the slack, this is a 10 or 11 win team. I feel confident going with the over for the Pokes.

The Horned Frogs should have the best defense in the Big 12. The question remains: can Kenny Hill or Foster Sawyer replace Trevone Boykin in the Sonny Cumbie/Doug Meachem offense? I think they can. What Cumbie and Meachem did with Boykin is nothing short of incredible. Hill and Sawyer are more natural QB’s and I don’t expect the offense to miss a beat.

The schedule has some good breaks. Arkansas is the only tricky non-conference, but the Razorbacks are in a semi-rebuild after losing running backs Alex Collins and Jonathan Williams. Also, Arkansas has to rebuild their stout offensive line from the past couple of seasons. Oh, and TCU gets that game at home.

Then, the Big 12 schedule is favorable with Oklahoma and Oklahoma State coming to Fort Worth. The bye weeks are ideal, one is before a long road trip to Morgantown, WV, and the other comes after a road game at Baylor and before Oklahoma State. It doesn’t get much better than that. Give me the over for the Horned Frogs.

Even just writing this is getting me juiced for college football… get me to September already! When the rest of the Big 12 over/unders come out, I’ll will be sure to post my thoughts here on Heartland College Sports. Thanks for reading and please leave your thoughts in the comments section!